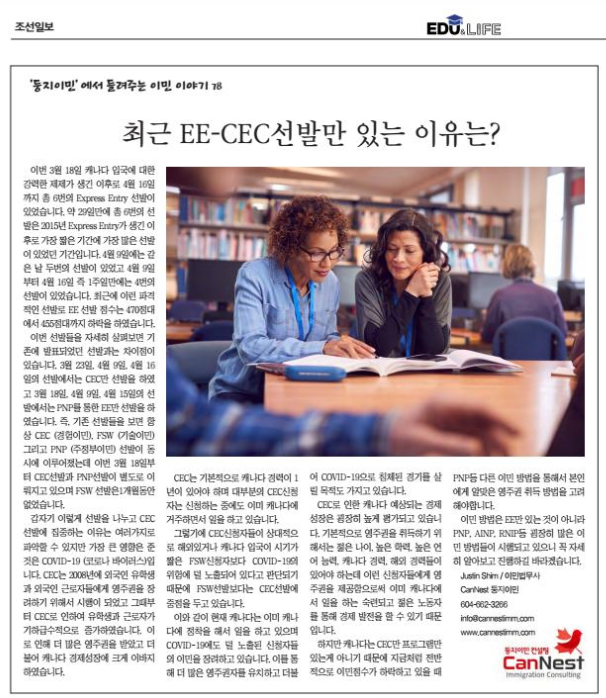 There have been a total of six Express Entry selections until April 16 since the entry into Canada on March 18. A total of six starts in about 29 days were the shortest since Express Entry was created in 2015. On April 9, there were two starts on the same day, and from April 9 to April 16, there were four starts in a week. Recently, due to such an unconventional selection, EE's starting score dropped from 470 to 455.

We can see why we're suddenly so focused on the selection and the CEC selection, but the biggest impact is COVID-19 (Chorona virus. The CEC was implemented in 2008 to encourage foreign students and foreign workers to have permanent residency, and the number of international students and workers has increased exponentially since then. As a result, I received more permanent residency and contributed greatly to the economic growth of Canada.

CEC basically requires a year of experience in Canada, and most CEC applicants already live and work in Canada while applying. Therefore, CEC selection is focused on CEC selection rather than FSW selection because CEC applicants are considered to be less exposed to the risk of COVID-19 than FSW applicants who are relatively overseas or who have a short time to enter Canada. As such, Canada has already settled in Canada and is encouraging the immigration of applicants who are less exposed to COVID-19. It aims to attract more permanent residents and revive the sluggish economy with COVID-19.

The expected economic growth in Canada due to CEC is highly regarded. Basically, in order to obtain permanent residency, we need young age, high education, high language skills, Canadian experience, and overseas experience, because by providing permanent residency to these applicants, we can make economic progress through skilled, young workers who already work in Canada.