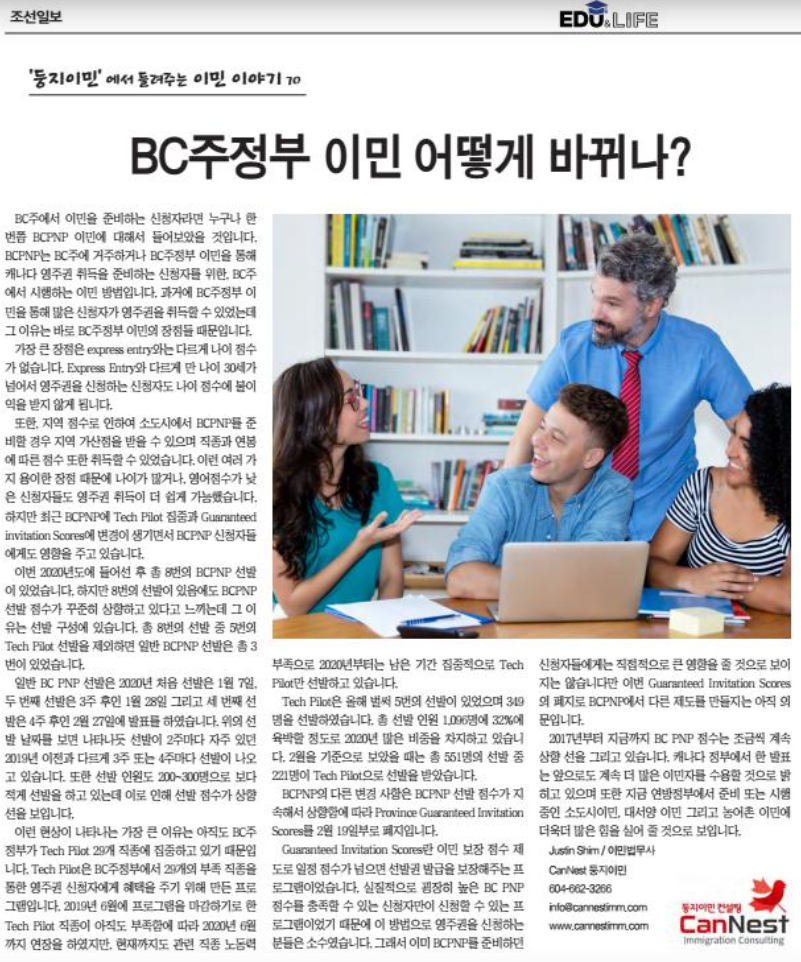 There have been a total of eight BC PNP selections since the beginning of 2020. Through the eight draws, you might think that the BC PNP score is steadily rising, and it is because of the selection configuration. With the exception of five Tech Pilot selections out of a total of eight draws, there were a total of three BC PNP draws. The general BC PNP draw was announced on January 7, three weeks later on January 28, four weeks later on February 27. As you can see from the draw date above, the selection is being made every three or four weeks, unlike in 2019, when the draw was frequent every two weeks. Also, the number of invitations is 200 to 300, which means the draw score is higher than before.

The biggest reason for this is that BC is still focused on 29 Tech Pilot occupations. Tech Pilot is a program created by BC government to benefit permanent residency applicants through 29 occupations listed on Tech Pilot program. The BC government extended the date to June, 2020 because they still have a labor shortage in those field. Tech Pilot has already had five draws this year and has selected 349 people. It accounts for a large portion of the total number of invitations in 2020, nearly 32 % of the 1,096 people. As of February, 221 people out of 551 people were invited through Tech Pilot program.

Other changes to the BC PNP are to abolish the Province Guaranteed Invitation Score as of February 19 as the BC PNP draw scores continue to rise up. The Guaranteed Invitation Score was an immigration guarantee program that insured to get an invitation if a certain score was exceeded. Few people applied for permanent residency in this way because it was a program that only few applicants could actually achieve that score. So it doesn't seem to have a direct impact on applicants who were already preparing for BC PNP, but it's still a question of whether BC PNP will create a different system with the abolition of this Guaranteed Invitation Scores. Since 2017, BC PNP scores have been gradually rising. The Canadian government's announcement says they will continue to accommodate more immigrants in the future, and it will also give more support to Rural and Northern Immigration Pilot, Atlantic Immigration Pilot and Agri-Food Immigration Pilot that are being prepared or implemented by the federal government.