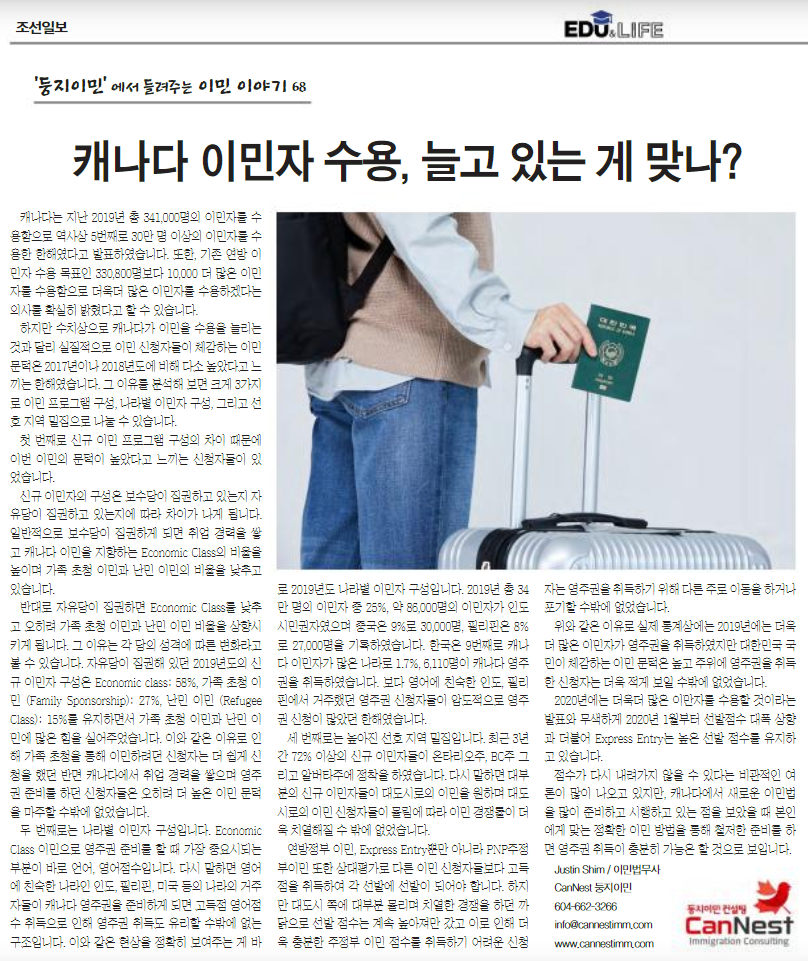 The Government of Canada announced in 2019 that it was the fifth year in history to accommodate more than 300,000 immigrants, with a total of 341,000 immigrants. It is also clear that it has expressed its intention to accommodate more immigrants by accommodating 10,000 more than the previous federal target of 33,800 immigrants. But, in numbers, unlike Canada's increased acceptance of immigration, the actual immigration threshold felt by applicants was a bit higher than in 2017 or 2018. If you analyze the reasons, you can divide it into three main categories: the formation of immigration programs, the composition of immigrants by country, and the population density in preferred regions.

First, there were applicants who felt that the immigration threshold was high because of the differences in the composition of the new immigration program. The composition of new immigrants depends on whether the Conservatives are in power or the Liberals are in power. In general, when the Conservatives come to power, they increase the proportion of the Economic Classes that have a career, seek to immigrate to Canada, and lower the proportion of parents and grandparents sponsorship and refugee immigration. On the contrary, the Liberals in power, economic class the upward to the Immigration and Refugees, the invitation of the family, but rather lower rate. The reason for this is a change in the nature of each party. The composition of new immigrants in 2019 when the Liberal Party was in power was Economic Class: 58%, Family Sponsorship: 27% and Refugee Class: 15% while maintaining parents and grandparents sponsorship and refugee immigration. For this reason, applicants who were willing to immigrate through parents and grandparents sponsorship were more likely to apply, while applicants who were preparing for permanent residency while working in Canada were forced to face higher immigration barriers.

The third is increased concentration of preferred areas. Over 72 percent of new immigrants have settled in Ontario, British Columbia and Alberta in the last three years. In other words, as most new immigrants want to move to big cities, the competition for immigration has become even fiercer. Federal immigration, Express Entry as well as PNP state immigration should be selected for each selection by earning higher scores than other immigration applicants by relative evaluation. However, due to the heavy competition in most large cities, the scores kept rising, forcing applicants who could not get more state immigration scores to move to other provinces or give up to acquire permanent residency.

For these reasons, the actual statistics show that more and more immigrants acquired permanent residency in 2019, but the immigration threshold felt by the people of Korea was high so made them think that fewer applicants acquired permanent residency in 2019. In contrast to the announcement that it will accommodate more and more people in 2020, Express Entry has maintained a high starting point, with a sharp increase in the number of starting points since January 2020. There is a lot of pessimism about the possibility that the score may not go down again, but given the fact that Canada is preparing and implementing a lot of new immigration laws, it is likely that you will be able to acquire permanent residency if you prepare thoroughly with the correct immigration method that suits you.