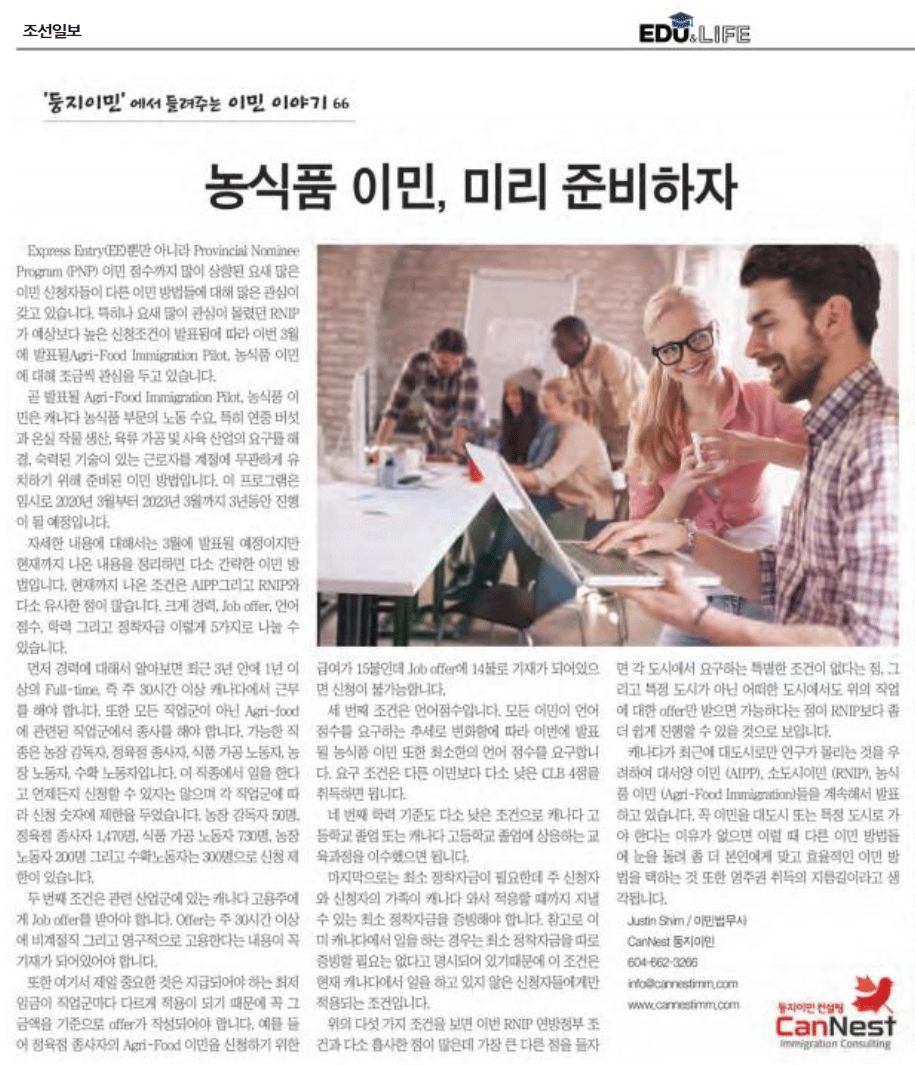 Many people wanting to immigrate to Canada are interested in finding other fastest ways of immigrating to Canada, as Express Entry (EE) and the Provincial Nominee Program (PNP) immigration scores have been raised. In particular, many of the people are interested in Agri-Food Immigration Pilot, which will be addressed in March, as the application eligibility requirements for Rural and Northern Immigration Pilot (RNIP), which has been drawing much attention recently, were announced last week.

Agri-Food Immigration Pilot, which will be announced soon, is a method of immigration prepared to address labor demand in the farm sector, especially in the mushroom and greenhouse crop production, meat processing and breeding industries throughout the year, and to attract skilled workers regardless of the season. The program will be temporarily run for three years from March 2020 to March 2023.

First of all, if you look at your career, you have to work in Canada for more than one full-time year, 30 hours a week, in the last three years. You also have to work in the agri-food-related occupational groups, not in all occupational groups. Possible occupations include farm supervisors, butchering workers, food processing workers, farmworkers, and harvest workers. You cannot apply at any time for a job in this job, and you have limited the number of applications to each job group. Applications are limited to 50 farm supervisors, 1,470 butcher workers, 730 food processing workers, 200 farmworkers, and 300 harvest workers.

The second condition requires a job offer from a Canadian employer in the relevant industry group. It must be reported that the offer will employ non-seasonal and permanent employees for at least 30 hours a week. Also, because the minimum wage that is most important is applied to different workgroups, an offer must be made based on that amount. For example, if the salary for Agri-Food immigration from a butcher is $15 and the job offer is $14, you are not eligible to apply.

The third condition is the language score. With all immigration changing to a trend that requires language scores, the newly announced farm emigration also requires minimal language scores. You can earn 4 CLB points, which are slightly lower than other immigrants.
Fourth, you need to complete a course corresponding to your Canadian high school graduation or Canadian high school graduation on a slightly lower standard of education.
Finally, minimum settlement funds are required, and provincial applicants and their families must be provided with minimum settlement funds to stay in Canada until they are adjusted. Please note that if you are already working in Canada, you do not need to provide a separate minimum settlement fund, so this condition applies only to applicants who are not currently working in Canada.

The above five conditions are somewhat similar to the RNIP federal government, and the biggest difference is that there are no special conditions required by each city and that it is possible to do so in any city other than a particular city, with only an offer of the above job, which would be easier than RNIP.
Canada continues to announce Atlantic Immigration Program Pilot (AIPP), Rural and Northern Immigration Pilot (RNIP), and Agri-Food Immigration Pilot out of concern that the population is only recently flocking to large cities. If there is no reason to go to a big city or a certain city, I think it is also a shortcut to acquiring permanent residency to look at other immigration methods and choose an efficient one.