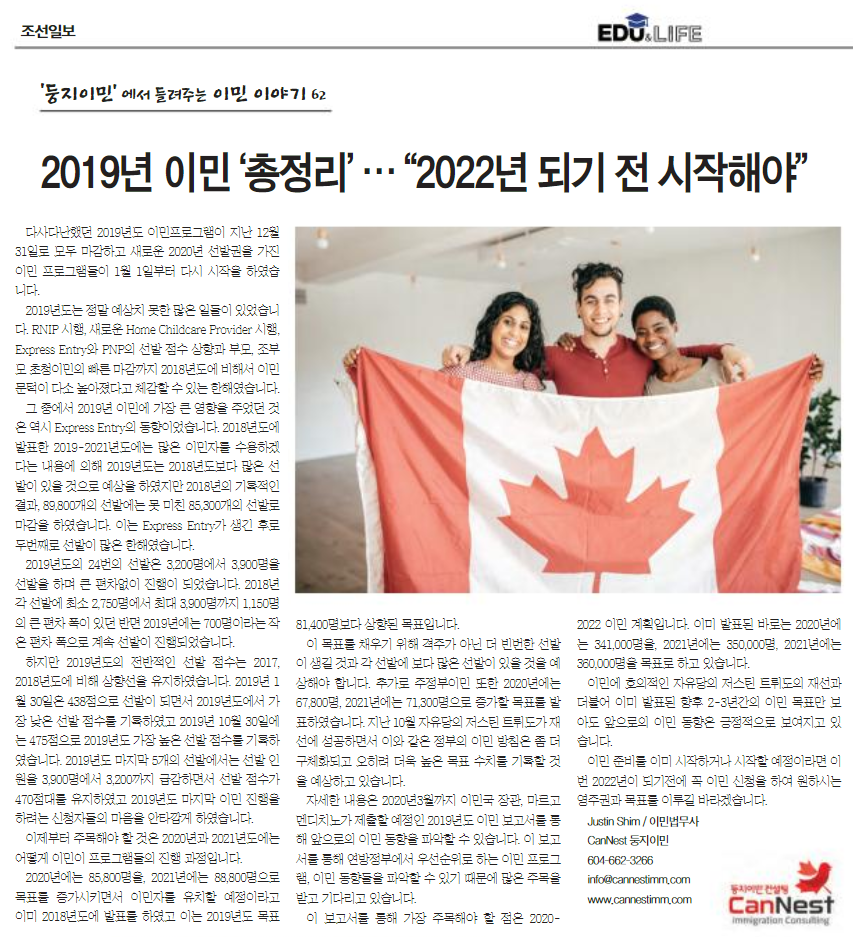 The all-encompassing 2019 immigration program ended on 31 December and new immigrant programs with 2020 selection rights began again on 1 January. There were a lot of unexpected things in 2019. Immigration thresholds were a bit higher than in 2018, including the RNIP, the new Home Childcare Provider, the Express Entry and PNP selection scores, and the early deadline for parents and grandparents.

One of the biggest impacts on immigration in 2019 was the trend in Express Entry. In 2019-2021, which was announced in 2018, it is expected that there will be more selections in 2019 than in 2018 due to the acceptance of a large number of immigrants. I did. This was the second most popular year since the Express Entry.

What should be noted from now on is how the immigration programs will be implemented in 2020 and 2021. We have already announced in 2018 that we will increase the target to 85,800 in 2020 and 88,800 in 2021, which is higher than the 2019 target of 81,400. To meet this goal, it is expected that there will be more frequent starters, not every other week, and more starters for each start. In addition, state immigration also announced its goal to increase to 67,800 in 2020 and 71,300 in 2021. The Liberal Party's Justin Trudeau was re-elected in October, and he expects the government's immigration policy to become more specific and even higher.

You can learn more about future immigration trends in the 2019 Immigration Report, which will be presented by the Minister of Immigration, Margo Mendicino, by March 2020. The report draws a lot of attention and attention because it provides insight into federal migration priority programs and immigration trends. The most noteworthy aspect of this report is the 2020-2022 immigration plan. As already announced, the target is 341,000 in 2020, 350,000 in 2021, and 360,000 in 2022.

In addition to the re-election of the Liberal Party's Justin Trudeau in favor of immigration, the immigration trend is positive for the next two to three years. If you have already started or plan to begin immigration, I hope you will apply for immigration before 2022 and achieve your desired permanent residency.