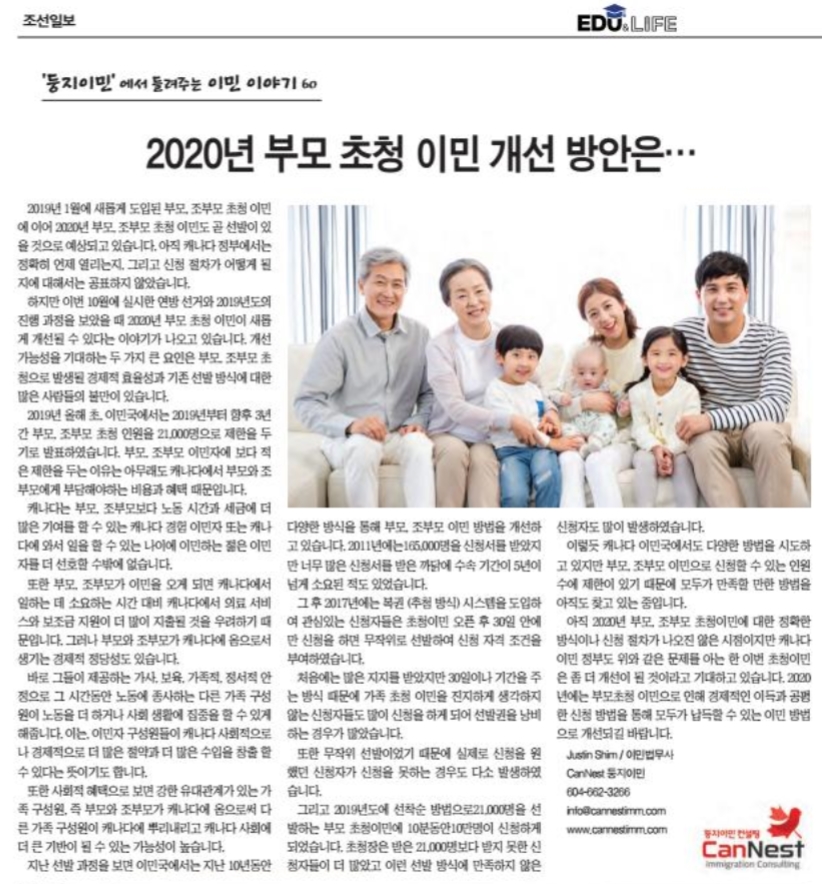 In addition to the newly introduced sponsoring parents and grandparents programme in January 2019, the 2020 parents and grandparents programme will be open soon. The Canadian government has not yet announced exactly when it will open and how the application process will take place. However, if we check the process of federal elections in last October 2019, there is a chance of a new improvement for the new parents, grandparents sponsorship programme. Two big factors that can be expected to improve are the economic efficiency occurring from the sponsorship and the dissatisfaction of traditional selection methods from many people.

Earlier this year, the immigration office announced a limit of 21,000 parents and grandparents sponsorship programme for the next three years from 2019. The strict limit on immigrant parents and grandparents is due to the costs and benefits that Canada have to be burdened by. Canada has no choice but to prefer a Canadian-experienced immigrant who can contribute more work time and taxes or a young immigrant who comes to Canada to work than a parent or grandparent.

They are also worried that if their parents or grandparents immigrate, Canada will spend more on health care and subsidies support than they spend on working time in Canada. But there is also economic justification for parents and grandparents coming to Canada. The housework, childcare, family, and emotional stability they provide allows other family members who work during that time to focus on more work or society. This means that immigrant members can generate more savings and more income both socially and economically in Canada. In terms of social benefits, as family members with strong ties—parents and grandparents— settle down in Canada, it is highly likely that other family members will take root in Canada and become a greater foundation for Canadian society.

In the last year, we have been improving immigration methods for parents and grandparents in various ways over the last decade. In 2011, we received 165,000 applications, but due to too many applications, the process took more than five years. In 2017, a lottery system was introduced, and interested applicants were randomly selected and applied to apply within 30 days of the invitational immigration. At first, it received a lot of support. However, because of the 30-day application period, many applicants who did not take family immigration seriously also applied and it was waste of selection. There were some cases where applicants who actually wanted to apply could not apply because it was a random selection.

In 2019, with the new first-come, first-served basis method, 100,000 applicants applied just in 10 minute. Due to the limit number of invitation for 21,000, there were more than 21,000 people who could not even apply and some people were not satisfied with this selection.

Despite of various methods Canada immigration office tried, due to the limit on the number of application, they are still searching for the best way to satisfy all people.

Although 2020 method and application process for the parents and grandparents sponsorship programme are not yet announced, as Canada immigration office is aware of problems, people expect to be improved. We hope that by 2020, a new parents immigration programme will be improved to a more acceptable way of immigration through economic benefits and fair application methods.