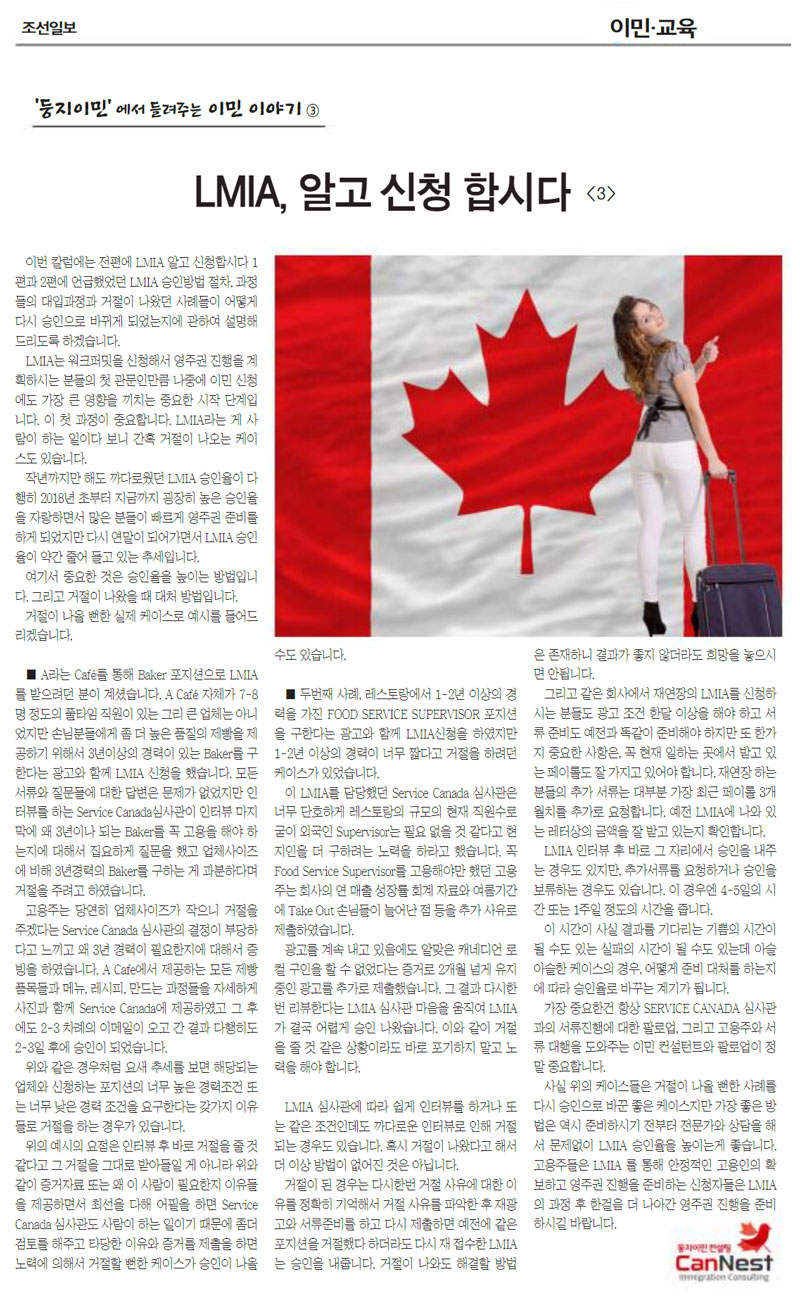 In this column, we will explain how LMIA was changed back to approval in the first and second episodes of LMIA approval procedures and procedures mentioned in the first and second chapters.
LMIA is an important starting point for those who plan to apply for a work permit and plan to proceed with their permanent residency, which will have the biggest impact on their future immigration applications. This first step is important. LMIA is what people do, so sometimes people say no.
Fortunately, the approval rate of LMIA, which was difficult until last year, has been very high since early 2018 and many people have prepared for permanent residency quickly, but as the year's end, the approval rate of LMIA is decreasing a little.
What's important here is how to increase the approval rate. And it's a way to deal with rejection.
I'll give you an example of a real case where it's almost rejected.

■ There was a person who wanted to get an LMIA in the Baker position through Cafe A. A Cafe itself wasn't a big company with seven or eight full-time employees, but we've applied for LMIA with an ad that says we're looking for a Baker with over three years of experience to provide you with higher quality bread. There was no problem answering all the documents and questions, but the inspector of Service Canada, who is interviewing, persistently asked why we should hire a three-year-old Baker at the end of the interview, and tried to refuse, saying it was too much to ask for a Baker with three years of experience compared to the size of the company.
The employer felt that the Service Canada examiner's decision to reject it was unfair because of its small size and provided evidence of why he needed three years of experience. A Cafe provided all the bakery items, menus, recipes, and the making process with detailed photos to Service Canada, and the result of 2-3 e-mails was fortunately approved two to three days later.
In these cases, the current trend may lead to rejection for reasons that require too high or too low a career condition for the position you are applying with the appropriate companies.
The point of the above example is not to accept the rejection as it would be right after the interview, but to appeal as best you can by providing the evidence or reasons why this person needs it, and the Service Canada examiner may also do it, so if he reviews it more and submits valid reasons and evidence, the case may be approved by effort.

■ In the second case, there was a case in which I applied for LMIA with advertisement that I was looking for FOOD SERVICE SUPERVISOR position with 1-2 years experience in a restaurant, but I tried to reject that my experience of more than 1-2 years is too short.
The LMIA judge, Service Canada, was adamant that the restaurant's current staff size would not require a foreign Supervisor, so try to find more locals. The employer, who had to hire Food Service Supervisor, submitted the company's annual revenue growth accounting data and the increase in Take Out customers during the summer for additional reasons.
We've submitted additional ads that have been in place for more than two months as evidence that we haven't been able to get the right Canadians local job even though we're still running the ads. As a result, LMIA moved the LMIA examiner's mind to review it once again, and finally, LMIA got the approval. Even in this situation, you should not give up and try.
Depending on the LMIA examiner, you may be interviewed easily or, even under the same conditions, rejected by difficult interviews. If you refuse, it doesn't mean you're out of options.
In case of rejection, once again, remember the reason for the rejection and then re-submit it after re-advertising and preparing the document. Even if you have refused the same position before, the LMIA, which has been re-submitted, will give its approval. There is a way to resolve the rejection, so don't let hope go, even if the results are not good.
And if you're applying for a re-extended LMIA from the same company, you have to do more than a month of advertising and prepare your documents the same way you used to, but the other thing is, you have to have the Payroll you're receiving at work. Additional documents for re-extensioners are usually requested for an additional 3 months of the most recent Payroll. Make sure you're getting the right amount for the letter from the old LMIA.
There are cases where approval is given immediately after an LMIA interview, but there are cases where additional documentation is requested or approval is withheld. In this case, we'll give you four to five days or a week.
This can be a time of failure, which can be a time of joy to actually wait for results, but in the case of a close case, depending on how you're prepared, you're going to change the approval rate.
The most important thing is always the follow-up with the SERVICE CANADA examiner, and the immigration consultant and the paper agent.
In fact, the above cases are a good one to change the near-rejected case back to approval, but the best way to do it is to talk to an expert even before you're ready to do it and increase your LMIA approval rate without any problems. Employers want LMIA to ensure stable employees and prepare applicants for permanent residency to prepare for a step further after the LMIA process.