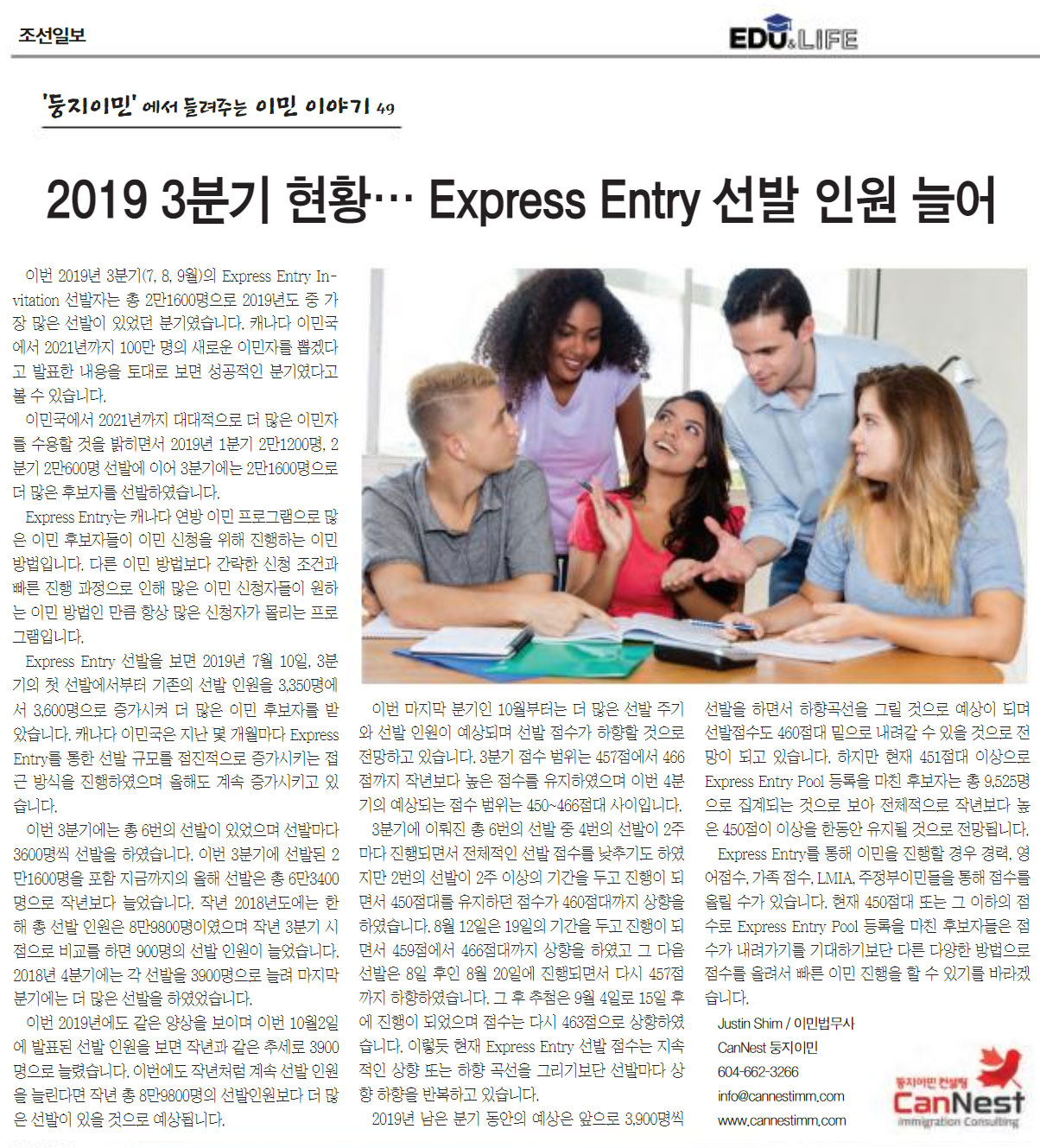 Express Entry is the Canadian Federal Immigration Program, which is an immigration method
that many immigration candidates apply for. Because of its simple application conditions and
fast process, it is a program that attracts many applicants at all times.

The selection of Express Entry led to more immigration candidates on July 10, 2019, increasing
the number of invitations from 3,350 to 3,600 from the first three quarters of the third quarter.
Immigration, Refugees and Citizenship Canada has taken an approach in the past few months
to gradually increase the size of its invitation through Express Entry and continues to increase
this year.

In the third quarter of this year, there were a total of six rounds with 3,600 selected for each one.
The total number of this year's selection, including 21,600 selected in the third quarter, is
63,400, which is seemingly increased. In 2018, the total number of people selected was 89,800,
compared to the third quarter of last year, and the number increased by 900. In the fourth
quarter of 2018, we increased each selection to 3,900, making more choices in the final quarter.
In 2019, we're doing the same thing. Based on the number of invitations announced on October
2, it has increased the number up to 3,900, which is the same trend as last year. If the current
state of affairs continue to increase the number of invitations this time, we expect to have more
than last year's total of 89,800.

The final quarter, October, is expected to see more invitation rounds and the draw point will be
lowered. The third quarter score range was 457 to 466 points, which is higher than last year's,
and this quarter's estimated range is between 450 and 466.

Four of the six rounds made in the third quarter were made every two weeks, and the overall
draw point was lowered, but two starts over a period of more than two weeks, and the score,
which remained in the 450-point range, fluctuated to the 460-point level. As August 12 moved
on for the 19th period, we moved up from 459 points to 466 points, and the next selection fell
back to 457 points eight days later August 20. Then, the draw was held 15 days after
September 4 and the score was raised again to 463. As such, the current Express Entry score
is not a constant upward or downward curve, but rather a series of upward and downward
curves for each selection.

Expectations for the remainder of the 2019 quarter are expected to be 3,900 selected and a
downward curve, with the starting score also expected to fall below the 460 mark. However, the
total number of candidates who have registered Express Entry Pool over 451 points is 9,525
and we expect to maintain more than 450 points overall, higher than last year.
If you are applying for Canadian permanent residency through Express Entry program, you can
earn points through your work experience, English proficiency test scores, family scores, LMIA,
and provincial nominee program. Candidates who are already enrolled in Express Entry pool with a score in the 450s or lower range will be able to improve their scores in a variety of other
ways rather than expect them to go down.