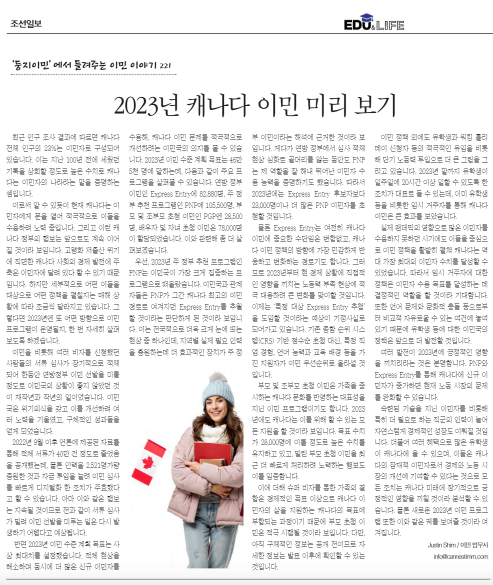 According to the latest census results, 23% of Canada's total population is made up of immigrants. This is past.
It's high enough to surpass the record set 100 years ago, proving that Canada is a country of immigrants.
So, as you can see, Canada is now trying to open its doors to immigrants and actively embrace them.
Yes, and it seems that the Canadian government will continue to do so. an aging population and low birth rate
This is because immigrants are the mainstay of the economic development of Canadian society facing a crisis. but
Specifically, what policies will be implemented for whom vary slightly depending on the situation every year.
Then, let's take a closer look at how the immigration program will be operated in 2023.
The long-term accumulation of document screening of immigrants and other visa applicants has led to the federal government for some time.
It was two years ago and last year that the situation in the immigration office was not good enough to postpone the selection of immigrants. The immigration office is...
With a sense of crisis, I made various efforts to improve it, and I got concrete results. The year 2022
Since September, the media has shown that the number of accumulated documents has been reduced to around 400,000.
It can be said that the increase of about 2,521 people and measures to quickly digitize immigration screening by increasing the injection of funds were effective.
There is. This is probably going to continue, so as before, we're going to have to delay immigration selection due to the lack of document screening.
It is expected that it will be difficult to happen again.
On the other hand, the 2023 Immigration Level Plan target has set an all-time high. It eliminates the accumulation phenomenon and at the same time, it's more...
We can see the Immigration Department's willingness to actively improve the immigration problem in Canada by accepting many new immigrants.
Yes, the goal of the 2023 Immigration Level Plan is 465,000 people, and the following are major programs.
You can look at it. 82,880 federal immigrants to Express Entry, state-recommended program PNP.
105,500 immigrants, 28,500 immigrants to PGP, and 78,000 immigrants to spouses and children.
Assigned. Let's take a closer look at this.
First of all, PNP, a state-recommended program in 2023, is the program that the Immigration Department focuses on the most.
It came to mind. Immigration and officials say that PNP has been considered Canada's best immigration route.
It seems that they decided that they would overtake Entry. This is a phenomenon that is more noticeable throughout the country.
One is that a more effective mechanism for recruiting real-world workers by region is based on the interpretation of state immigration.
It seems to be. Moreover, while the federal government is struggling with the deepening of screening congestion, the PNP is not.
He also played a good role and proved his outstanding ability to accommodate immigrants. So, in 2023, Express Entry will be available.
We will invite 23,000 more PNP immigrants than candidates.
Of course, Express Entry is still an important tool for immigration to Canada, and the direction of immigration policy in Canada remains unchanged.
It is also the most sensitive and changing path. So from 2023 onwards, we're going to have a direct impact on the current economic situation.
We will face major changes to actively respond to the labor shortage that affects us. Now it's a specific target.
The prospect of introducing 'Express Entry raffle' is becoming a foregone conclusion. Existing Overall Rankings
Instead of system (CRS)-based score order invitations, applicants with specific job experience, language skills and educational backgrounds immigrate.
It will be a priority.
Parental and grandparent-invited immigration is representative of Canadian culture that values families.
It's also a program. In 2023, Canada is expected to do everything it can to do to achieve this.
The target figure remains as high as 28,000, and the backlog of parent-invited immigration has recently increased.
This is also evidenced by the effort to deal with it quickly. In addition to this, the combination of families through super visas
It is a process that meets Canada's goal of supporting the life of Canadian immigrants beyond economic goals.
Parent-invited immigration is expected to be actively implemented. However, detailed information is not released yet.
The information will be available after the announcement.
In addition to immigration policies, the short-term labor force, including the active influx of international students and working holiday applicants, etc.
I'm drawing a bigger picture with input. Until the end of 2023, international students can work more than 20 hours a week.
The measures to ensure that immigration to Canada is already large through temporary residents, including international students.
It worked. In fact, even at a time when the pandemic prevented us from accommodating many immigrants,
By actively implementing immigration policies around it, Canada has been able to achieve the largest number of immigrants ever.

The policy towards temporary residents will therefore play a crucial role in achieving the immigration acceptance targets.
I look forward to it. Also, being able to be relatively free from language problems and cultural conflicts.
Therefore, the immigration policy for international students will develop further in the future.
It is clear that various developments will have a positive impact on 2023. PNP and Express Entry
Increasing new immigrants to Canada could alleviate the current labor market problems. skilled
The number of people in particular who need more jobs, including immigrants, will increase, which will naturally lead to economic growth.
In addition, many international students can come to Canada with various benefits, and these are the potential of Canada.
As an immigrant, all measures can be taken to improve the economy and the labor market, and the labor market.
It can be analyzed that it will have a positive effect in the long term. Of course, the new 2023 immigration program will also be introduced.
It's thought to show an ark like this.