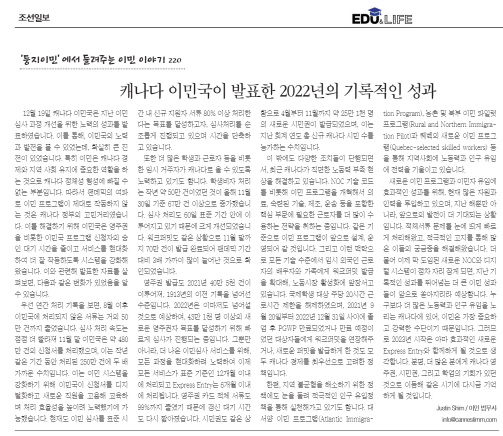 On December 19, the Canadian Immigration Service announced the results of its efforts to improve the last immigration screening process. Teeth
Through this, I was able to see the efforts and developments of the Immigration Department, which certainly made great progress. Especially immigration to Canada.
It plays an important role in maintaining the economy and community, and is an indispensable part of the formation of Canadian identity.
So, in the aftermath of the pandemic, the immigration program is not working properly for the Canadian government.
That was my concern. To solve this problem, the Immigration Department approves applicants for immigration programs, including permanent residency.
We have strengthened our systems to work better by reducing latency and modernizing services. in this connection
If you look at the published data, you can see that the following changes have occurred.
First of all, looking at the annual processing records, since August, the number of documents that have not been processed by the Immigration Department has decreased by almost 500,000.
The screening process has been accelerating, with the Immigration Department processing about 4.8 million applications at the end of November, which was last year.
That's nearly double the 2.5 million cases handled over the same period. This is to strengthen the immigration system.
The Immigration Department has tried to digitize applications, hire new employees to train, and increase processing efficiency.
It was possible. Today, the goal is to process more than 80 percent of new applicants' paperwork in time.
In order to achieve this goal, the screening process is going smoothly and the time is being shortened.
We are also trying to get more students, workers, and other temporary residents to come to Canada.
Student visa processing was about 500,000 last year to more than 670,000 as of November 30 this year.
Increased. The screening process has also improved significantly as it takes place within a 60-day standard period.
In the same situation, 700,000 cases have been issued by the end of November, nearly three times more than during the pandemic period.
It has been confirmed that it has increased.
The number of permanent residency issuance was also 405,000 in 2021, surpassing the previous record in 1913.
Expecting 2022 to exceed this, achieving a new permanent resident target of more than 431,000
The screening is proceeding quickly for that. Not only that, but for better immigration screening services, the whole process.
Trying to modernize, all services are now delivered within the standard 12 months and Express Entry is 6 months.
It will be processed within the next few days. Since we reduced the number of documents for permanent residency cards by 99%, the waiting time for renewal is also reduced.
It's shortened. Citizenship is in the same situation, and from April to November, about 251,000 new citizenship will be registered.
issued, exceeding the total number of new Canadian citizens in the last fiscal year.
Various other measures have been implemented to address Canada's recent labor shortage.
Yes, we have. We've revamped our immigration program, including the NOC technology code, and we've been able to make healthcare, skilled technology, manufacturing, transportation, etc.
We are taking a strategy to accommodate more workers in key sectors, including. Immigration on the same basis
The program will be designed and operated in the future. And in this context, temporary at all levels of technology.
We are taking the lead in revitalizing the labor market by expanding the issuance of work permit to spouses and families of foreign workers.
The limit on working hours per week for international students was lifted, and from September 20, 2021 to December 31, 2022.
In between, PGWP has expired or is scheduled to expire after graduation, or the work permit has been extended or new.
It is also a policy that puts Canada's economy first.
On the other hand, we will also focus on policies to resolve regional imbalances and implement them through active population inflow policies.
There are also. Atlantic Immigration Program, Rural and Northern Immigration Pilot
The Rural and Northern Immigration Pilot and Quebec's New Immigration Programme (Quebec-selected)
Through skilled workers, etc., we are focusing our efforts on the influx of labor and population into the community.

In order to achieve effective results in new immigration programs and immigration inflows, a lot of resources and manpower are currently being invested and
There is, and not only last year, but also future developments are expected. visibly over the cumulative documentation problem
It has been handled quickly and has solved many people's questions through active notification. And now...
As the new NOCs and digital systems that have been introduced become increasingly entrenched, they will be greater than the previous record performance.
I expect immigration achievements to pour in in the future. seeking more labor and population inflows than anyone else.
This is because immigration is the most important and powerful means for Canada. So the beginning of 2023 is probably...
I think we'll be able to work with the new Express Entry that's effective. I'm sure that more people in Canada
Permanent residency, citizenship, and academic opportunities will be remembered again at the same time the following year.