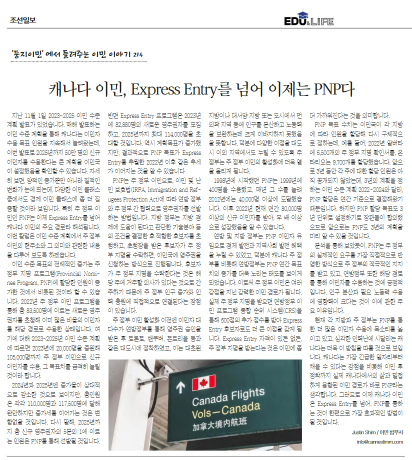 On November 1st, the 2023-2025 immigration level plan was announced. Through the annual immigration level plan,
Canada has continued to increase its target number of immigrants, with the announcement of 500,000 new arrivals by 2025
You can see that the Immigration Department has set up a big plan to accommodate immigrants. If you look closely, it's quantitative
There is not only an increase, but also a qualitative change, and among the various immigration classes, the economic immigration class is a little more prominent
I think he's going to focus. In particular, the PNP, a state immigrant, has now moved beyond Express Entry to become a major source of immigration to Canada
It's interpreted as a path. This column shows the current state of state immigration and its implications in the immigration level plan
Let me deal with the content.
The overall increase in immigration-level targets has led to the Provincial Nominee Program (PNP)
It can be said that it stems from the increase in the number of people assigned. Total through state immigration program in 2022
We've invited up to 83,500 new permanent residents, who have already accepted a large percentage of immigrants through that route
That's the status. And according to the 2023-2025 Immigration Level Plan, 20,000 more people will be added in 2023
State immigration will accommodate up to 105,000 new immigrants, sharply increasing the target.
In 2024 and 2025, the growth rate seems to have decreased relatively, but the total number of people is 110,000 each
It's a slow 117,500, but it won't change if it continues to increase. In other words, by 2025, all guns
Up to a fifth of new permanent residents will be selected through the PNP. 반면 Express Entry
The program will recruit 82,880 new permanent residents in 2023 and invite up to 114,000 by 2025
That's right. Planning targets have also increased, but the result is that after 2022 when PNP targets overtook Express Entry,
You can see that the same trend continues
The PNP is state immigration, and it has been introduced into the Immigration and Refugees Protection Act (IRPA)
Therefore, it is a way to select permanent residents in cooperation between the federal and state governments. Local governments have a local economy
After determining the conditions of the technical field, etc. that were deemed helpful, the appropriate candidate was invited and an invitation was received
If the candidate accepts the state nomination, it will proceed by applying for permanent residency with the Immigration Department. Candidate state
State population because accepting a government nomination is considered to be willing to reside in the state
It has the advantage of being directly linked to increase and recruitment.
Prior to the state's activation of immigration, the majority of immigrants were granted permanent residency through the federal government, followed by Toronto,
They settled in big cities like Vancouver, Montreal, etc., and this was in the prairie, Atlantic, or cities
It means that it did not contribute much to dispersing the population and supplementing the labor force in remote outer areas. Thanks to
So that you can enjoy a variety of benefits outside of big cities, the state is more eager to boost state immigration
and upload it.
The PNP, which started in 1998, accommodated 400 people in 1999, and increased that number every year to 40,000 in 2012
You have reached the ideal. Since then, as of 2022, it has received more than 80,000 new immigrants annually, more than doubling
You can see that they've grown. Federal and local governments develop their economies and communities with the influx of PNP immigrants
We were able to benefit from that, and the federal government, including the Canadian state government, increased the annual PNP target
I've come to show an attitude of targeting. So state immigration is a powerful migration path with many strengths
If you actually get a state nomination, you'll get 600 points through the CRS
Additional points will also give you a greater advantage as an Express Entry candidate. Whether you're eligible for Express Entry,
Without it, getting a state nomination means getting closer to immigration.
The PNP target figures are re-established by the Immigration Department by assigning personnel to each province, for example
Alberta allocated 6,500 state nomination certificates and Ontario 9,700 in 2022. For the next three years,
The quota for each state in the meantime has not yet been disclosed, but the immigration level plan, which sets a three-year plan, 2022-
This is because, unlike 2024, the PNP allocation has been determined on an annual basis. But the PNP allocation target is also on a three-year basis

Ministers have agreed to set up, so the PNP will also know in advance its three-year plan.
As we have seen from the analysis, the PNP is a state in a way that most directly reflects the actual needs of the state
It's actively supported by the government, and the federal government is also taking in immigrants through that route
Positive. The main reason for this is that it has a large impact on population distribution and the acceptance of the necessary labor force.
Currently, local and state governments are voicing the need for more immigrants through the PNP, and they are facing severe labor shortages
Suffering Canada is likely to follow this path even more. Canada can fill the most pressing jobs
The immigration route, which is closely integrated with life in Canada, from the strength of being there to the settlement after immigration, is
I think it's the PNP. So immigration to Canada now goes beyond Express Entry, through the PNP
On the one hand, it will be the most effective way.