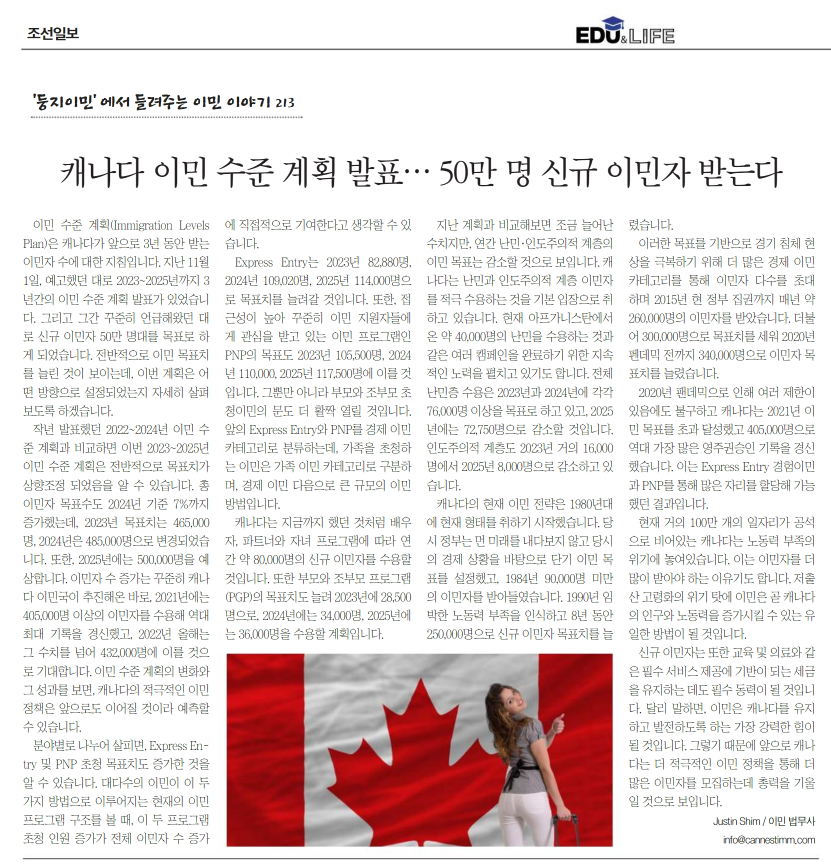 The Immigration Levels Plan is designed to address the number of immigrants Canada receives over the next three years
Guidelines. On November 1, the announcement of a three-year immigration level plan from 2023 to 2025, as predicted, was made
Yes, and as we've been talking about, we've been targeting 500,000 new immigrants.
Overall, we see an increase in immigration targets, and we're going to see how this plan is set
Let's take a look.
Compared to the 2022-2024 immigration level plan announced last year, this 2023-2025 immigration level plan is
Overall, you can see that the target has been raised. The total number of immigrants is also up to 7% as of 2024
It increased, with the target changing to 465,000 in 2023 and 485,000 in 2024. also,
We expect 500,000 by 2025. The increase in the number of immigrants has been steadily promoted by the Canadian Immigration Service
In 2021, it accommodated more than 405,000 immigrants, breaking an all-time high, and this year, in 2022
It is expected to exceed 432,000 people. If you look at the changes in immigration level planning and the results, you can see Canada
It can be predicted that active immigration policies will continue in the future.
If you look at each field, you can see that the Express Entry and PNP invitation targets have also increased.
Given the structure of the current immigration program, where the majority of immigrants are done in these two ways, these two programs
You might think that the increase in the number of invitees directly contributes to the increase in the total number of immigrants. Express Entry is
The target will be increased to 82,880 in 2023, 109,020 in 2024, and 114,000 in 2025. also,
The goal of the PNP, an immigration program that has been steadily attracting attention from immigration applicants due to its high accessibility, is also in 2023
It will reach 105,500, 110,000 in 2024, and 117,500 in 2025.
In addition, the door to immigration invited by parents and grandparents will be wider. Express Entry and PNP in the beginning
It is classified into economic immigration categories, and immigrants inviting families are classified into family immigration categories, and economic immigration
Next is the large scale immigration method. Canada, let's learn, partner, and children as we have done so far
Depending on the program, it will accommodate about 80,000 new immigrants per year. Also, parents and grandparents
The PGP also increased its target to 28,500 in 2023, 34,000 in 2024, and 2025
It plans to accommodate 36,000 people.
Compared to the previous plan, the number has increased slightly, but the annual refugee and humanitarian immigration target has decreased
It appears to be. Canada's basic stance is to actively accept refugees and humanitarian immigrants
I'm getting drunk. There are many campaigns, such as accommodating about 40,000 refugees from Afghanistan
They are also making ongoing efforts to complete it. The entire refugee population was accepted in 2023 and 2024, respectively
It targets more than 76,000 people, and will decrease to 72,750 by 2025. The humanitarian hierarchy
It is decreasing from nearly 16,000 in 2023 to 8,000 in 2025.
Canada's current immigration strategy began to take its current form in the 1980s. The government at that time has a long way to government
We set a short-term immigration target based on the economic situation at the time, and in 1984 we set a target of less than 90,000 people
I accepted immigrants. Recognizing the impending labor shortage in 1990, 250,000 new workers in eight years
I've increased my immigration target. More economies to overcome recession based on these goals
It invites a large number of immigrants through the immigration category, and until the current government takes power in 2015, it has about 260,000 people a year
I received an immigrant. Also, set a target of 300,000 people, and 340,000 people before the 2020 pandemic
I've increased my immigration target. Despite many restrictions due to the 2020 pandemic, Canada has
It exceeded its 2021 immigration target and broke the record for granting permanent residency with 405,000.

This was the result of the Express Entry experience immigration and the PNP, which allowed many seats to be allocated.
Canada, where nearly a million jobs are currently vacant, faces a labor shortage.
This is also why more immigrants should be received. Due to the crisis of low birth rates and aging population, immigration in Canada means that
It will be the only way to increase the population and the labor force. The new immigrants are also responsible for education and healthcare
It will also be an essential driver for maintaining taxes based on the provision of the same essential services. In other words,
Immigration will be the most powerful force for Canada to maintain and develop. So, in the future,
Canada is expected to make all-out efforts to recruit more immigrants through more active immigration policies.