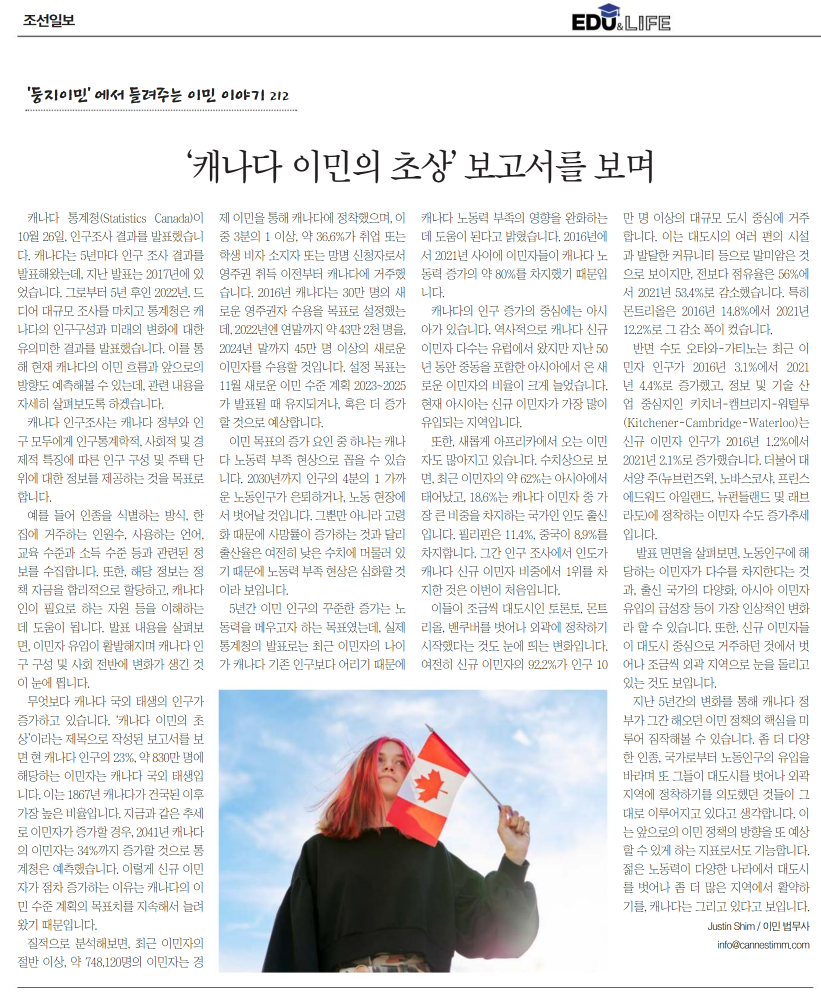 The Statistics Canada released the results of the census on October 26. Canada is every five years
We've published the results of the census, and the last one was in 2017. Five years later, in 2022
Finally, we're done with a large-scale survey, and the National Statistical Office has shown significant results on Canada's population composition
We've announced that we can predict the current immigration trend in Canada and the future direction
Let's take a closer look at the content.
The Canadian Census is based on demographic, social, and economic characteristics of both the Government and the population of Canada
It aims to provide information about the composition and housing units. For example, the way race is identified
Collect information related to the number of people living at home, the language you use, the level of education and income. also,
This information will help you rationalize policy funding and understand the resources required by Canadians
Well, if you look at the announcement, there's an active influx of immigrants and changes in Canadian population composition and society as a whole
It stands out.
Above all, the population of people born abroad in Canada is increasing. Under the title of "Portrait of Canadian Immigration,"
According to the report, 23 percent of Canada's current population, about 8.3 million immigrants, are from outside Canada
Born. This is the highest percentage since Canada was founded in 1867. With the current trend, immigrants are becoming increasingly vulnerable
If it increases, Canada's immigration population will increase by 34 percent by 2041, the National Statistical Office predicted. It's new
The reason for the increasing number of immigrants is that they have continued to increase the target of Canada's immigration level plan.
Qualitatively, more than half of the recent immigrants, about 748,120 immigrants, are through economic immigration
More than a third of them, or 36.6 percent, are employed or student visa holders or asylum seekers
As an applicant, I lived in Canada before I obtained permanent residency. In 2016, Canada had 300,000 new employees
It has set a goal of accepting permanent residents, with about 432,000 by the end of 2022 and 450,000 by the end of 2024
We will accommodate these new immigrants. The goal is to set a new immigration level plan for November 2023-2025
It is expected to be maintained at the time of announcemented.
One of the reasons for the increase in immigration targets is the shortage of Canadian labor. by 2030
Nearly a quarter of the population will retire, or leave the workplace. Not only that, but also aging
Therefore, the labor shortage is due to the fact that the birth rate remains low, unlike the increase in mortality
The phenomenon is likely to intensify. The steady growth of the immigrant population over the past five years has been an effort to fill the workforce
It was a goal, but according to the statistics office, the age of recent immigrants is younger than the existing population of Canada
It says it helps alleviate the impact of Canada's labor shortage. Between 2016 and 2021,
This is because immigrants accounted for about 80 percent of Canada's labor force growth.
At the heart of Canada's population growth is Asia. Historically, many of Canada's new immigrants have become
The proportion of new immigrants from Europe and Asia, including the Middle East, over the past 50 years has been significant
It's increased. Currently, Asia has the largest influx of new immigrants. Also, newly in Africa. Africa
The number of immigrants coming is increasing. In terms of figures, about 62 percent of recent immigrants were born in Asia
18.6% are from India, the country that accounts for the largest proportion of Canadian immigrants. 11.4% in the Philippines, and China
It accounts for 8.9%. So far, India has topped the list of new immigrants to Canada in the census
This is my first time.
And the fact that little by little, they left the big cities of Toronto, Montreal, and Vancouver and began to settle outside

It's a significant change. Still, 92.2% of new immigrants live in large urban centers with a population of more than 100,000.
This seems to have been lost to various convenience facilities and developed communities in large cities, but the share is more than before
It decreased from 56% to 53.4% in 2021. In particular, Montreal recorded 12.2% in 2021 from 14.8% in 2016
The decline was significant. Ottawa-Gatino, on the other hand, has a recent immigrant population of 4.4% in 2021, up from 3.1% in 2021
There has been an increase, and Kitchener-Cambridge-Waterloo, the center of the information and technology industry, is a major city
The population of new immigrants increased from 1.2% in 2016 to 2.1% in 2021. In addition, the Atlantic (New Brunswick, New Brunswick)
the immigrant capital of Nova Scotia, Prince Edward Island, Newfoundland and Labrador)
It's on the rise.
In terms of presentation, immigrants corresponding to the working population account for the majority, diversification of the country of origin,
The most impressive change is the rapid growth of the influx of Asian immigrants. Also, new immigrants
It is also seen that they are gradually turning to the outer area, away from living in the center of a large city. Last
Through the five-year change, we can guess from the core of the immigration policy that the Canadian government has been doing. Some
We hope that there will be an influx of working people from more diverse races and countries, and that they will be able to move out of the big cities and into the suburbs
I think the things that were meant to be settled are being done. That's not the case for future immigration policies
It also serves as an indicator to predict the direction. In a country with a diverse young workforce, we're going to have big cities
It seems that Canada is drawing to move away and play in more areas.