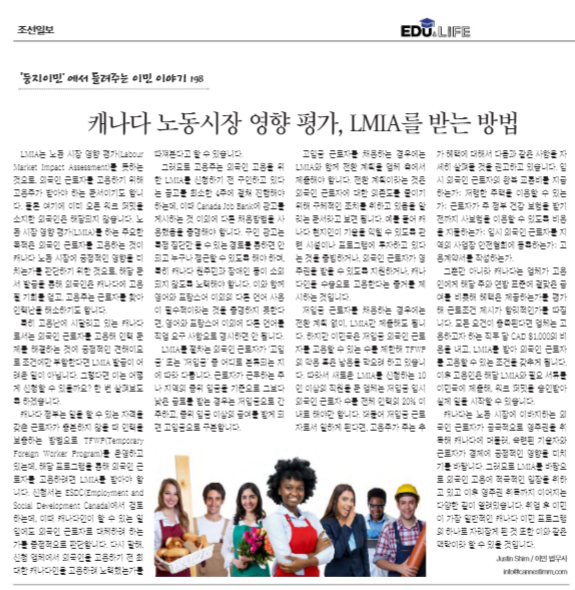 LMIA stands for Labour Market Impact Assessment
It is also a document that an employer must receive to hire. Of course, there's an open work permit here
Foreigners are not applicable. The main purpose of the Labor Market Impact Assessment (LMIA) is to provide foreign workers
To determine whether employment has a positive impact on the Canadian labor market, such documentation
Through issuance, foreigners get the opportunity to be hired in Canada, and employers find workers to solve the labor shortage
I do. Especially Canada, which is suffering from employment difficulties, employs foreign workers to solve the problem of human resources
It's a positive view, so it's not difficult to issue LMIA if it meets the conditions Then this is
How can I apply? Let's take a look.
The Government of Canada is a way to replenish its workforce when there are not enough qualified workers to work
The TFWP (Temporary Foreign Worker Program) is operated by foreigners
To hire a worker, you need to get an LMIA. The application form is ESDC (Employment and Social Development)
Canada is considering whether Canadians are willing to replace foreign workers even though they can
Focus on your judgment. In other words, I'm trying to hire as many Canadians as I can before I hire a foreigner from the application company
You can say that you're trying to figure it out.
Therefore, the employer has at least four weeks' notice that he is seeking an LMIA for foreign employment
It has to be done over time, but it's not just about posting an ad on Canada Job Bank, it's about hiring other people
You must prove that you used it. Job ads can't be viewed by a specific group
Access should be made accessible, and in particular, efforts should be made to ensure that native Canadians and the disabled are not alienated.
In addition, if the use of languages other than English and French does not prove essential, then English and French are not required
Do not specify any language other than French as a job requirement.
The procedure for LMIA depends on whether foreign workers are classified as 'high wage' or 'low wage'.
If you receive a lower salary based on the median wage of the state or region where the worker works, you will receive a lower wage
It is considered, and if you get paid above the median wage, it is classified as high wages.
When hiring high-wage workers, the company must submit a transition plan with LMIA. change
The plan is to announce that specific measures are being taken to reduce dependence on foreign workers
It's a document. For example, to allow local people in Canada to learn the technology, the facilities or programs involved
You can prove that you're investing, you can help foreign workers get permanent residency, you can help them get Canadian citizenship
It's about giving evidence of probationary employment.
If you hire low-wage workers, you can submit only LMIA without a conversion plan. But the Immigration Department
They are trying to prevent abuse or abuse of TFWP by limiting the number of low-wage foreign workers they can hire.
Therefore, a company with more than 10 employees applying for a new LMIA will have a full number of low-wage temporary foreign workers
It has to be within 20% of the workforce. In addition, if you work as a low-wage worker, the employer's addition
It is recommended that you take a closer look at the benefits as follows. a round trip of temporary foreign workers
Do you pay for transportation; do you have access to affordable housing; until a worker receives state health insurance
Do you pay for private insurance; temporary foreign workers to the local workplace safety association
register; prepare an employment contract.
In Canada, the benefits of a company to its employees, including salaries that meet the state and federal standards, are not limited

Evaluate whether it is provided and whether it is reasonable to present working conditions. If all the requirements are met, the company will be able to
You pay CAD$1,000 per job you want to hire and receive LMIA to hire foreign workers
You'll meet the conditions. The employee then submits the LMIA and the necessary documents to the Immigration Department for a work permit
You can get approved and start working.
In Canada, foreign workers who contribute to the labor market eventually obtained permanent residency and stayed in Canada
We hope that skilled technicians and workers will have a positive impact on the economy. So based on LMIA,
It is taking an active stance on foreign employment and various paths leading to the acquisition of permanent residence thereafter
It's open. And it's also because post-employment immigration has become one of the most common Canadian immigration programs
It's kind of in this context.