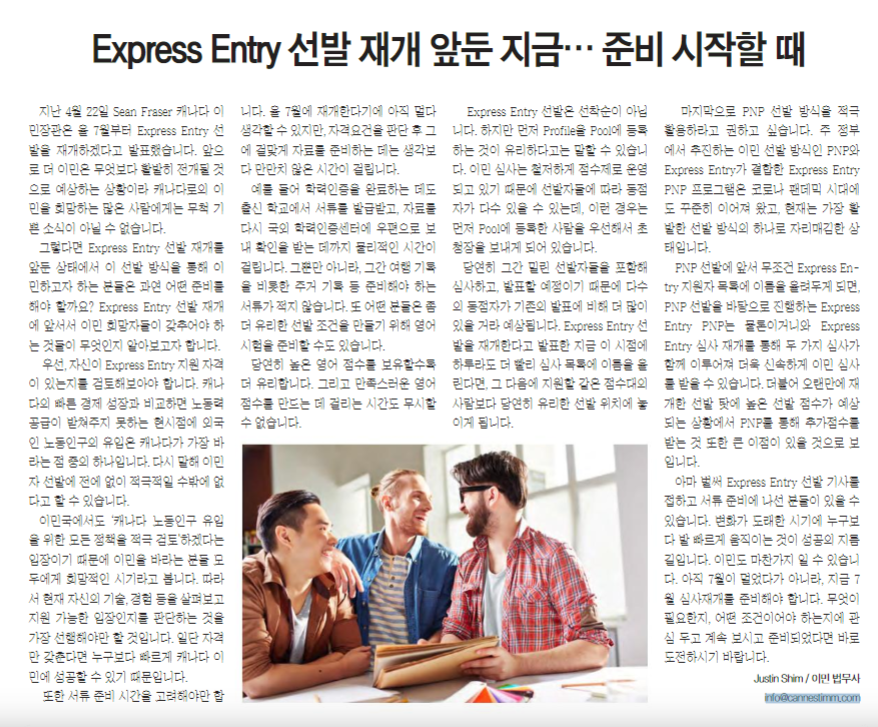 On April 22, Canadian immigration minister Sean Fraser announced that he would resume selecting Express Entry from July this year. It is very good news for many people who want to immigrate to Canada because we expect more immigration than anything else. Then, what preparations should those who want to immigrate through this selection process, with Express Entry about to resume? Before resuming the selection of Express Entry, we would like to learn what immigrants need to have.
First of all, you need to review your eligibility for Express Entry support. Compared to Canada's rapid economic growth, the influx of foreign workers is one of Canada's most desired things at a time when labor supply is not supporting it. In other words, we have no choice but to be more active than ever in selecting immigrants. I think it is a hopeful time for all those who want to immigrate because the Immigration Bureau is also in a position to "actively review all policies for the influx of Canadian labor." Therefore, it is best to look at your skills, experience, etc. and determine whether you are in a position to support. This is because once you are qualified, you can succeed in immigrating to Canada faster than anyone else.
You should also consider document preparation time. It may be far from being resumed this July, but it takes more time than I thought to prepare the data accordingly after judging the qualifications. For example, it takes a physical time to complete the certification of academic background from your school and send the materials back to the overseas certification center for confirmation. In addition, there are many documents that need to be prepared, including travel records and residential records. Others may prepare for the English test to create more favorable selection conditions. Of course, the higher the English score, the more advantageous it is. And the time it takes to make a satisfactory English score cannot be ignored.
Express Entry selection is not on a first-come, first-served basis. However, I can say that it is advantageous to submit the document first. Since immigration screening is strictly operated on a score system, there may be a number of tiebreakers depending on the starters, in which case the person who submitted the documents first is required to send an invitation first. Naturally, there will be more tie-makers than previous announcements because they will be judged and announced, including the starters who have been delayed. If you're on the judging list as soon as you announce that you're resuming your Express Entry selection, then you're definitely in a better position than the next person in the same score range to apply for.
Lastly, I would like to encourage you to actively utilize the PNP selection method. The Express Entry PNP program, which combines PNP, an immigration selection method promoted by the state, and Express Entry, has continued steadily in the era of the COVID-19 pandemic, and is now one of the most active selection methods. If you put your name on the list of Express Entry candidates before the PNP selection, you will be able to receive immigration more quickly through the resumption of the Express Entry screening as well as the Express Entry PNP based on the PNP selection. In addition, receiving additional points through PNP is also expected to have a great advantage at a time when high starting points are expected due to the first time in a long time.
There may be people who have already read the Express Entry selection article and are preparing documents. Moving faster than anyone else in a time of change is the shortcut to success. The same could be true of immigration. It's not that July is still far away, but we have to prepare for the resumption of the July screening now. Please continue to look at what is needed and what conditions should be, and if you are ready, try right away.