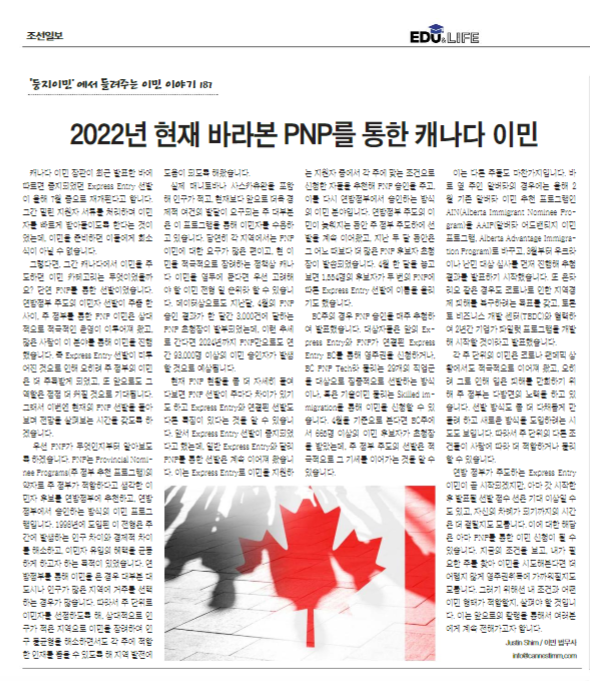 Canada's immigration minister recently announced that the suspended selection of Express Entry will resume sometime in July this year. In the meantime, it has been about processing backlogs of applicants and quickly accepting immigrants, which is good news for those who were preparing to immigrate. So, what was the immigration category that led immigration in Canada? It was definitely a PNP selection. While federal-led immigration slowed down, PNP immigration through state governments has been relatively active, and many people have immigrated through this field. In other words, the delay in selecting Express Entry has led to more attention from the state government, and the role is expected to grow in the future. So this time, let's look back at the current PNP selection and look at the prospects.
First, let's find out what PNP is. The PNP stands for Provincial Nominee Programs, a federal immigration program that recommends and approves immigration candidates that the state considers appropriate. Introduced in 1998, the screening was aimed at resolving the interstate population and economic disparities, and equalizing the benefits of immigration. If you immigrate through the federal government, you often choose to live in large cities or populated areas. Therefore, we have selected immigrants on a state-by-state basis, encouraging them to migrate to relatively sparsely populated areas, helping to eliminate population imbalances and recruit the right people for each state to help develop the region.
In fact, most states, including Manitoba and Saskatchewan, have smaller populations and require more economic conditions to develop in the future, with the program accommodating immigrants. Naturally, there are many demands for PNP immigration in each region, and if you are mindful of Canadian immigration due to the policy of actively encouraging current immigration, it is a priority for immigration screening. Data shows that last month and April's PNP approval results issued 3,000 PNP invitations in a month, and at this rate, PNP alone is expected to generate more than 93,000 immigration approvals annually by 2024.
A closer look at the current PNP status shows that PNP selection varies from state to state and that selection linked to Express Entry has different characteristics. Earlier, it was said that the selection of Express Entry was suspended, but unlike ordinary Express Entry, selection through PNP has continued. This is an area of immigration in which the PNP is approved by the federal government by recommending applicants who support immigration through Express Entry to those who apply for state-specific conditions. While federal-led immigration has been delayed, state-led selection has continued, and more PNP candidates have been sent in the past two months than ever before. In April, 1,554 candidates were named in the Express Entry selection according to two PNPs.
In the case of BC shares, PNP approval was announced by lottery every week. Subjects can apply for permanent residency through Express Entry BC, which is previously linked to PNP, select 29 occupational groups called BC PNP Tech, or apply for immigration through Skilled Immigration called Technology Migration. As of April, more than 665 immigration candidates in BC received invitations, indicating that state-led selection actively continues. This is the same for other states. In February this year, Alberta changed its current Alberta Immigrant Nominee Program (AIN) to AAIP (Alberta Advantage Immigration Program), and began screening Ukrainian refugees in March to announce the results. Ontario also announced that it will work with the Toronto Business Development Center (TBDC) to develop and start an entrepreneur pilot program for two years with the goal of repairing the local economic damage caused by COVID-19.
Immigration at each state level has been active in the COVID-19 pandemic situation, and rather, the state government is making various efforts to compensate for the damage caused by it. There are also attempts to make the selection more colorful and to introduce new methods. Therefore, different conditions on a weekly basis may be more appropriate or disadvantageous depending on the person. Federal-led Express Entry immigration will begin soon, but perhaps the selection scoreline that will be announced just after the start may be above expectations, or it may take longer for it to be your turn. The answer to this may be immigration applications through the PNP. If you look at the current conditions and try to immigrate to the states you need, it may not be harder to get permanent residency. In order to do that, I will have to look at my conditions and what type of immigration will be appropriate. I'd like to continue to share this with you in future columns.