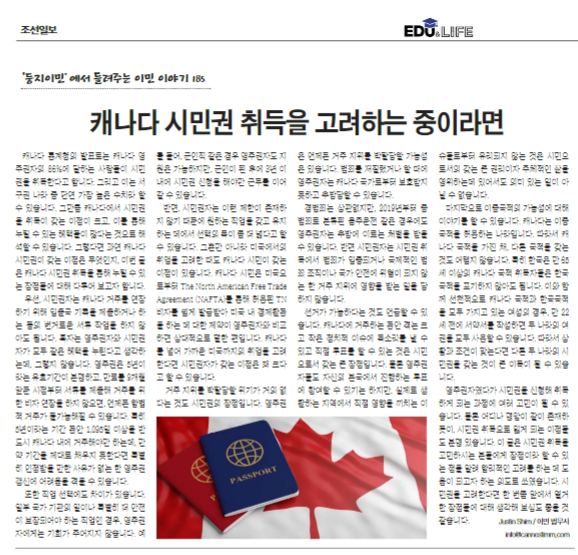 Statistics Canada says up to 86 percent of permanent residents in Canada get citizenship. And that's by far the highest number of Western countries. It can be interpreted that the benefits of acquiring citizenship in Canada are great, and there are many benefits that can be enjoyed through this. Then, what are the advantages of Canadian citizenship, and this article will deal with the advantages of acquiring Canadian citizenship.
First of all, citizens don't have to submit entry and exit records to extend their stay in Canada. Some people think that both permanent residents and citizens enjoy the same benefits, but they don't. Permanent residency has a clear expiration date of five years, and if you do not extend your visa for residence by submitting documents from nine months before the expiration, legal residence may not be possible at any time. In particular, you must live in Canada for more than 1,095 days for a five-year period, and if you do not meet the period properly, you may have difficulty renewing your permanent residency unless there is a reason to be recognized.
There are also differences in job choices. Permanent residents are not given the opportunity to work in some national institutions or in particular jobs that require greater security. For example, in the case of military service, permanent residents can apply, but they must apply for citizenship within three years of becoming a soldier to continue working. On the other hand, citizens have more choices in getting and maintaining the job they want because these restrictions do not exist. In addition, there is an advantage of Canadian citizens when considering employment in the United States. Canadian citizens have relatively less restrictions on economic activities in the United States than permanent residents by easily obtaining TN visas granted through The North American Free Trade Agreement (NAFTA). Considering employment beyond Canada to the nearby United States, the benefits of citizenship are quite great.
Another advantage of citizenship is that there is little risk of deprivation of residential status. Permanent residency is likely to be forfeited at any time. In the event of a crime or committing a crime, permanent residents may be deported without protection from the Canadian state. Minor crimes do not matter, but permanent residents can be punished up to deportation even in cases of drunk driving, which has been classified as a serious crime since 2019. Citizens, on the other hand, will not be affected by their residential status unless they are proven guilty or pose a threat to international criminal organizations or national safety in obtaining citizenship.
You can also mention that elections are possible. Being able to speak out and vote in person is a great advantage of being a citizen of Canada. Of course, permanent residents can participate in voting in their own countries, but not being separated from issues that directly affect the area in which they live is a great right as citizens and a meaningful way to lead an independent life.
Finally, we can talk about the possibility of dual citizenship. Canada allows dual citizenship. Therefore, it is not difficult to have a different nationality, while having Canadian citizenship. Especially in Korea, Canadian citizens aged 65 or older do not have to give up their Korean citizenship. In addition, women who are born with both Canadian and Korean nationalities can use both countries' passports if they fill out a pledge before the age of 22. Therefore, it can be a great benefit to have citizenship in two different countries if the situation and conditions are right.
The process of applying for and obtaining citizenship after being a permanent resident can be a problem. Of course, just as light and shade exist everywhere, there are certainly advantages that are lost by citizenship acquisition. This article is intended to help people who are worried about obtaining citizenship by informing them of the advantages that can be said to be an advantage and giving them reasonable consideration. Considering citizenship, it would be good to think about the advantages listed above at least once.