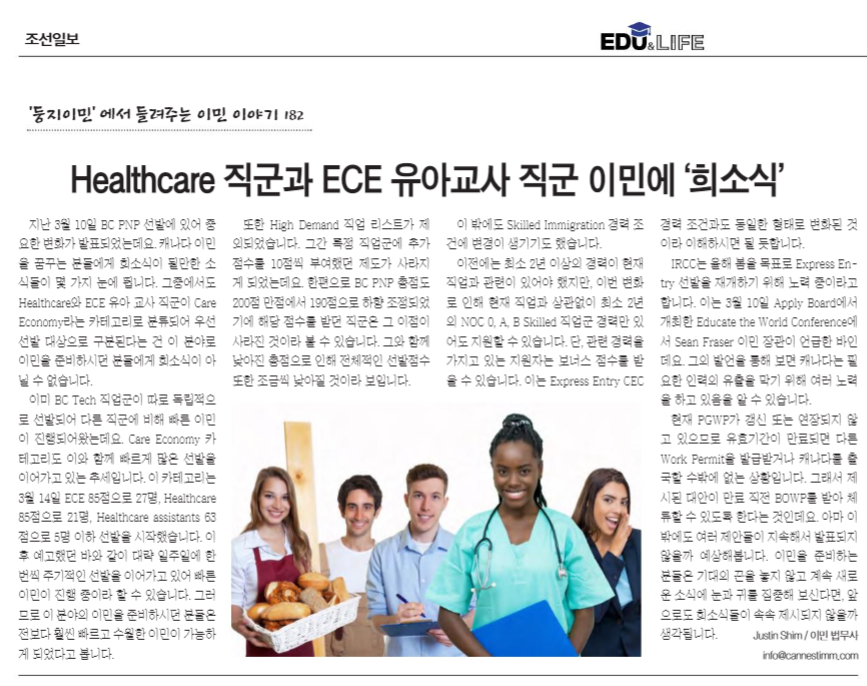 On March 10, an important change in BC PNP selection was announced. There are some good news for those who dream of emigrating to Canada. Among them, it is good news for those preparing to immigrate to this field that Healthcare and ECE early childhood teacher positions are classified as Care Economy and classified as priority selection.
Already, BC Tech's occupation group has been selected independently, and immigration has progressed faster than other occupations. The Care Economy category is also rapidly continuing to be selected. The category started with 27 ECE 85 points on March 14, 21 with Healthcare 85 points, and Healthcare assistants 63 points to select less than five. As we have announced since then, we are continuing regular selection about once a week, so we can say that rapid immigration is underway. Therefore, I think those who were preparing to immigrate in this field can immigrate much faster and easier than before.
The High Demand job list was also excluded. In the meantime, the system that gave additional 10 points to certain occupational groups has disappeared. On the other hand, the total score of BC PNP was lowered to 190 out of 200 points, so the advantage of the job group that received the score has disappeared. With that, the overall starting score will also be slightly lowered due to the lowered total score.
There have also been changes to Skilled Immigration career conditions. Previously, at least two years of experience was required to be relevant to your current job, but this change allows you to apply with at least two years of NOC 0, A, and B Skilled work experience regardless of your current job. However, applicants with relevant experience can receive bonus points. You can understand that this has changed in the same form as the Express Entry CEC career conditions.
IRCC is trying to resume the selection of Express Entry with the goal of spring this year. This is what immigration minister Sean Fraser said at the Educate the World Conference on March 10 at the Apply Board. His remarks show that Canada is making various efforts to prevent the outflow of necessary personnel. Currently, PGWP is not renewed or extended, so you have no choice but to get another Work Permit or leave Canada when the expiration date expires. So the proposed alternative is to receive a BOWP and stay just before expiration. I expect that many other proposals will continue to be announced. If you are preparing to immigrate and keep focusing your eyes and ears on new news, I think good news will be presented one after another.