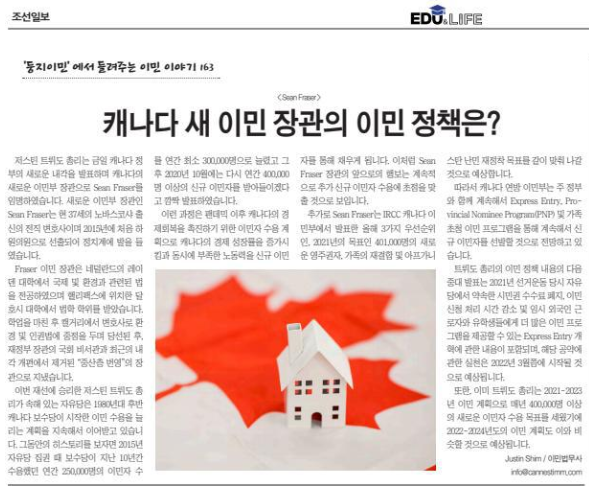 Prime Minister Justin Trudeau announced today's new cabinet of the Canadian government and appointed Sean Fraser as Canada's new Minister of Immigration. Sean Fraser, the new Minister of Immigration, is a 37-year-old former lawyer from Nova Scotia, who was first elected to the House of Representatives in 2015 and entered politics.
Minister Fraser of Immigration majored in international and environmental law from Leiden University in the Netherlands and received a degree in law from Dalhosh University in Halifax. After completing his studies, he was elected as a lawyer in Calgary, focusing on environmental and human rights laws, and served as the Minister of Finance's parliamentary secretary and minister of "middle-class prosperity" removed from the recent cabinet reform.
The Liberal Party, which includes Prime Minister Justin Trudeau, who won the re-election, continues to take over plans to increase immigration acceptance, which began in the late 1980s by the Canadian Conservative Party. According to the history so far, the Conservative Party raised the number of immigrants to at least 300,000 per year during the past decade when the Liberal Party took power in 2015, and then announced in October 2020 that it would accept more than 400,000 new immigrants per year. This process is a plan to accommodate immigrants to promote Canada's economic recovery after the pandemic, increasing Canada's economic growth rate and filling the insufficient labor force with new immigrants. As such, Minister Sean Fraser's future moves are expected to continue to focus on accepting additional new immigrants.
In addition, Sean Fraser expects to meet this year's three priorities announced by the IRCC Canadian Immigration Department, the goal of 2021 of 401,000 new permanent residents, families, and resettlement of refugees in Afghanistan. Therefore, the Canadian Federal Ministry of Immigration predicts that it will continue to select new immigrants through Express Entry, the Provincial Nominee Program (PNP) and family invitation immigration programs with the state government.
The next big announcement of Prime Minister Trudeau's immigration policy will include the abolition of citizenship fees promised by the Liberal Party during the 2021 election, reduction of immigration application time, and reform of Express Entry to provide more immigration programs to temporary foreign workers and international students. In addition, Prime Minister Trudeau has already set a new goal of accommodating more than 400,000 immigrants every year with his 2021-2023 immigration plan, so the 2022-2024 immigration plan is expected to be similar.