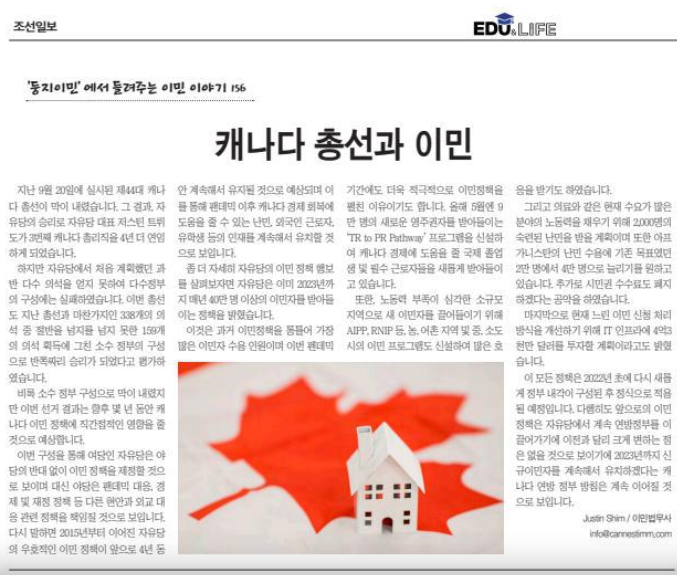 The 44th Canadian general election on September 20th ended. As a result, Liberal Party leader Justin Trudeau will serve four more years as the third Prime Minister of Canada. However, the Liberal Party failed to form a majority of the government because it did not get the majority of seats that were first planned. Like the last general election, the general election was evaluated as a half-way victory with the formation of a minority government that won only 159 seats, less than half of the 338 seats.
Although the election ended in the formation of a minority government, the election results are expected to have a direct or indirect impact on Canadian immigration policy over the next few years. Through this composition, the ruling Liberal Party is expected to enact immigration policies without opposition from the opposition party, instead, the opposition party is expected to be responsible for other issues such as pandemic response and economic and fiscal policy and foreign response policies. In other words, the Liberal Party's friendly immigration policy, which has continued since 2015, is expected to continue to attract talent such as refugees, foreign workers, and international students who can help Canada's economic recovery after the pandemic.
If you look more closely at the Liberal Party's immigration policy move, the Liberal Party has already announced a policy to more than 400,000 immigrants every year by 2023. This is the largest number of immigrants in the past immigration policy and is also the reason for the more active immigration policy during this pandemic. In May this year, the "TR to PR Pathway" program, which accepts 90,000 new permanent residents, is newly accepting international graduates and essential workers who will help the Canadian economy. In addition, in order to attract new immigrants to small areas with severe labor shortages, AIPP, RNIP, and other immigration programs in rural, fishing, and small and medium-sized cities were newly established and received a lot of favorable responses. And we plan to receive 2,000 skilled refugees to fill the current high-demand labor force, such as medical care, and we also want to increase the number of refugees in Afghanistan from 20,000 to 40,000. In addition, we pledged to abolish citizenship fees. Finally, he said he plans to invest $430 million in IT infrastructure to improve the current slow immigration processing method.
All of these policies will be officially applied after a new government cabinet is formed in early 2022. Fortunately, the Canadian federal government's policy to continue attracting new immigrants by 2023 is expected to continue, as future immigration policies are unlikely to change much as before as the Liberal Party continues to lead the federal government.