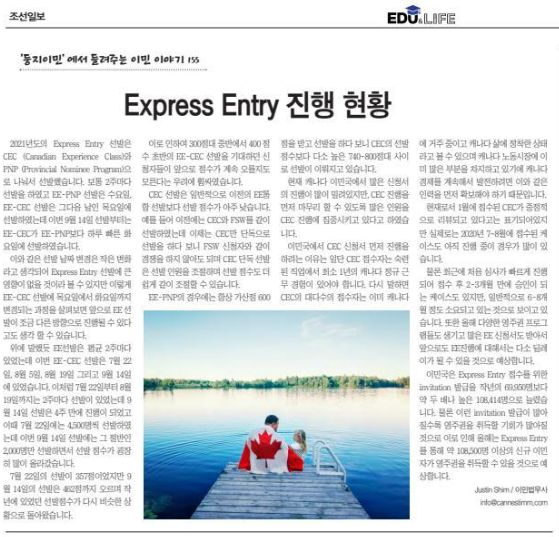 The 2021 Express Entry selection was divided into CEC (Canadian Experience Class) and PNP (Professional Nominee Program). Usually, the selection was made every two weeks, and the EE-PNP selection was on Wednesday, and the EE-CEC selection was on Thursday, the next day, but from September 14th, EE-CEC was selected on Tuesday, a day earlier than EE-PNP.
This change in the starting date is considered a small change, so it will not have a significant impact on the Express Entry selection, but looking at the process of changing the EE-CEC selection from Thursday to Tuesday, you can also think that the EE selection could proceed in a slightly different direction in the future.
As mentioned above, EE selection took place every two weeks on average, but this EE-CEC selection took place on July 22, August 5, August 19 and September 14. As such, there were starters every two weeks from July 22nd to August 19th, and on September 14th, the selection took place in four weeks, and on July 22nd, 4,500 people were selected, and only half of the starters, 2,000 people, raised their starting scores a lot. The starting point on July 22 was 357 points, but the starting point on September 14 rose to 462 points, returning to a similar situation last year. As a result, applicants who were looking forward to starting EE-CEC in the mid-300s to early 400 points were worried that their scores might continue to rise in the future.
CEC selection generally has a very low starting score compared to the previous EE integrated selection. For example, in the past, CEC and FSW were selected together, but now CEC alone is selected, so you don't have to compete with FSW applicants, and CEC alone controls the number of starters and makes it easier to adjust the starting score.
In the case of EE-PNP, they are always starting with 600 additional points, so they are starting between 740 and 800 points, slightly higher than CEC's starting score.
Currently, the Canadian Immigration Bureau is behind in the progress of many applications, but it is said that a large number of people are focusing on the progress of CEC so that they can complete the progress of CEC first. The reason why the Immigration Department wants to proceed with the CEC application first is that once CEC applicants must have at least a year of regular Canadian work experience in skilled jobs. In other words, the majority of CEC recipients are already living in Canada and settled in Canada, and they already occupy a large part of the Canadian labor market, so they need to secure such manpower first to continue developing the Canadian economy.
Currently, it is marked that the CEC received in January is being reviewed intensively, but in fact, there are many cases that received in July-August 2020 are still in progress. Of course, there are cases in which the first screening proceeds quickly recently and approval is made two to three months after application, but it generally seems to take six to eight months. In addition, various permanent residency programs have been created this year and many EE applications have been received, so it is expected that there will be some delays in the progress of EE in the future.
The Immigration Bureau has increased the issuance of invitations for Express Entry applications to 108,414, about twice as high as last year's 69,950. Of course, the more invitations are issued, the more opportunities they will have to obtain permanent residency, which is expected to allow more than 108,500 new immigrants to acquire permanent residency through Express Entry this year.