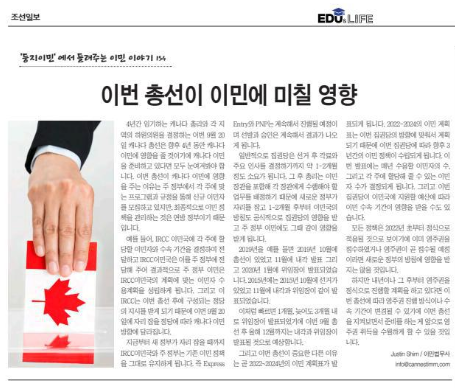 The September 20 Canadian general election, which will determine Canadian Prime Minister, who will serve four years, and lawmakers in each region, will affect Canadian immigration over the next four years, so everyone should pay attention to it.
The reason why this general election affects immigration to Canada is that the state is recruiting new immigrants through programs and regulations suitable for each state, but it is the federal government that finally manages immigration policies. For example, the IRCC Immigration Bureau decides and delivers immigrants and procedures to each state, and the IRCC Immigration Bureau delivers them to the state, resulting in a plan to accommodate immigrants in accordance with the IRCC Immigration's plan. And the IRCC will be instructed by a political party that will be formed after this general election, so the direction of immigration to Canada depends on the party to be located on September 20.
From now on until the new government is established, the IRCC Immigration Bureau and state governments will maintain their existing immigration policies. In other words, Express Entry and PNP will continue, and selection and approval will continue to produce results. In general, it takes about 1-2 months for the ruling party to decide on ministers and key figures after the election. Since then, the prime minister assigns tasks to each minister, including immigration ministers, the immigration office's policy will officially be affected by the ruling party and state immigration from a month or two after the new government takes office.
For example, in 2019, there was a general election in October 2019, a cabinet announcement in November, and a power of attorney was announced in January 2020. In 2015, there was an election in October 2015, and in November, the cabinet and power of attorney were announced together. As such, a power of attorney has been announced as early as one month or at the latest three months, it is expected that the cabinet and power of attorney will be announced by December this year after the general election in September.
And another reason why this general election is important is that the immigration plan for 2022-2024 will soon be announced. Since the 2022-2024 immigration plan is planned in accordance with the direction of the ruling party, immigration policies for the next three years will be established under the ruling party. The announcement will determine the number of immigrants to accommodate every year and the number of immigrants to be allocated to each state. And the immigration period may be affected by the budget that the ruling party will apply to the immigration office.
All policies are expected to be officially applied from the beginning of 2022, so if you have already received permanent residency or permanent residency is scheduled to be received soon, you will not be affected by the new government's policy. However, if you are planning to officially proceed with permanent residency next year or after, the method or duration of permanent residency may change depending on this general election, so it will be easier to obtain permanent residency in the future.