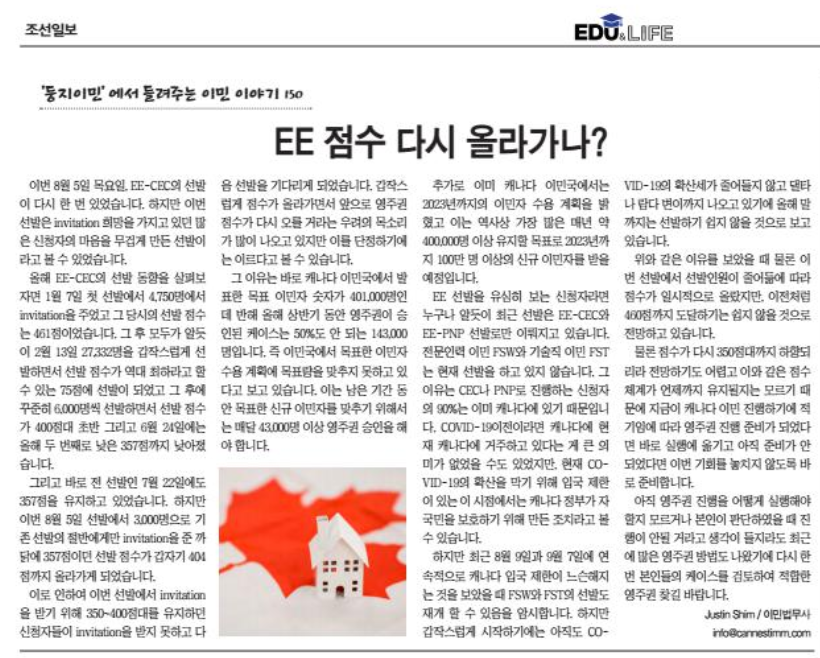 On Thursday, August 5th, EE-CEC was selected once again. However, this selection was a heavyweight for many applicants who had hope for invitation.
Looking at EE-CEC's selection trend this year, it gave 4,750 invitations in the first selection on January 7th, and at that time, the starting score was 461. Since then, as everyone knows, the starting score has been lowered to 75 points, which is the lowest ever, on February 13, and 6,000 people have been selected steadily, down to the early 400 points and 357 points, the second lowest point of the year, on June 24. And I was maintaining 357 points on July 22nd, the previous starter. However, the starting score from 357 points suddenly rose to 404 points because the selection was 3,000 on August 5th, which was only half of the previous selection.
As a result, applicants who had maintained between 350 and 400 points to receive invitation in this selection failed to receive the invitation and waited for the next selection. As the score suddenly rises, there are many concerns that the score of permanent residency will rise again in the future, but it is too early to conclude.
The reason is that the target number of immigrants announced by the Canadian Immigration Service is 401,000, while the number of permanent residency approved during the first half of this year is 143,000, less than 50%. In other words, the Immigration Service is not meeting its target immigration plan. This requires the approval of over 43,000 permanent residency per month to meet the target new immigrants for the rest of the year.
In addition, the Canadian Immigration Service has already announced its plan to accommodate immigrants by 2023, which is expected to receive more than 1 million new immigrants by 2023 with the aim of maintaining more than 400,000 per year, the largest number in history.
As anyone who is looking closely at EE selection knows, recent selection is only conducted with EE-CEC and EE-PNP selection. Professional immigration FSW and technical immigration FST are not currently selecting. The reason is that 90% of applicants who proceed with CEC or PNP are already in Canada. Before COVID-19, it would have been meaningless to live in Canada now, but at a time when there are restrictions on entry to prevent the spread of COVID-19, the Canadian government has made the move to protect its citizens. However, the recent lifting of restrictions on entry to Canada on August 9th and September 7th suggests that the selection of FSW and FST could also be resumed. However, it is not easy to select until the end of this year because the spread of COVID-19 has not decreased and the Dalta or Lambda mutations are still coming out.
Given the above reasons, of course, the score has increased temporarily due to the decrease in the number of starters in this selection, but it is predicted that it will not be easy to reach 460 points as before. Of course, it's hard to predict that the score will fall back to the 350s, and we don't know how long this system will last, so if it's the right time to immigrate to Canada, we'll do it right away and make sure we don't miss this opportunity. Even if you don't know how to proceed with permanent residency yet or think it won't work when you decide, many permanent residency methods have recently been introduced, so please review your case and find a suitable permanent residency.