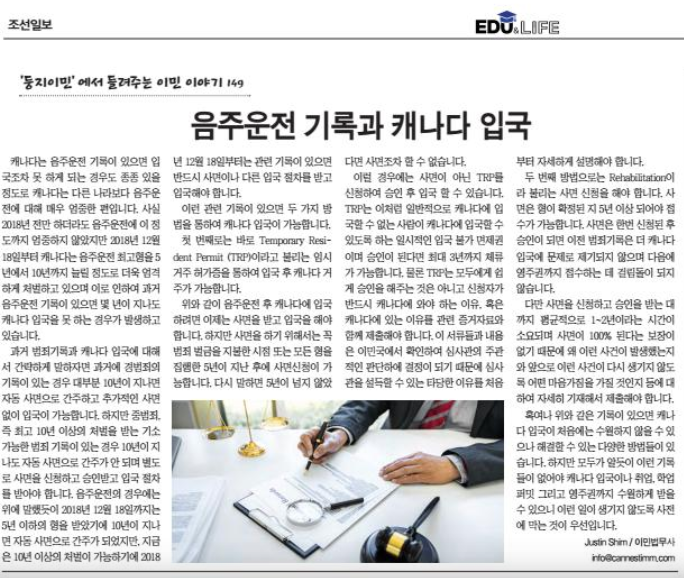 Canada is more strict about drunk driving than other countries, as it often fails to even enter the country if it has a drunk driving record of drunk driving. In fact, even before 2018, Canada was not strict enough to drive under the influence of alcohol, but since December 18, 2018, Canada has been more severely punishing to increase the maximum penalty of driving under the influence of alcohol from five to ten years, which is why it is impossible to enter Canada even after a few years.
Briefly speaking of past criminal records and entry into Canada, most cases of misdemeanors in the past are considered automatic pardons after 10 years and can be entered without additional pardons. However, if there is a record of felony crimes, or prosecutable crimes that are punishable by up to 10 years, they will not be automatically pardoned after 10 years, and will be required to apply for a separate pardon, be approved and entered the country. In case of drunk driving, as mentioned above, it was considered an automatic pardon after 10 years because it was sentenced to less than 5 years until December 18, 2018, but now it is punishable by more than 10 years, so if there is a related record, you must enter the country with a pardon or other immigration procedures.
With these related records, you can enter Canada in two ways.
First, you can live in Canada after entering the country through a temporary residence permit called Temporary Resident Permit (TRP). As above, if you want to enter Canada after drunk driving, you must now enter the country with a pardon. But in order to grant amnesty, you can apply for an amnesty after five years of paying a criminal fine or executing all the sentences. In other words, if it hasn't been more than five years, you can't even get a pardon. In this case, you can apply for TRP, not amnesty, and enter the country after approval. TRP is a temporary non-entry exemption that allows people who cannot enter Canada to enter Canada, and if approved, they can stay up to three years. Of course, TRP does not give everyone an easy approval, but it must submit the reason why the applicant must come to Canada, or why he or she is in Canada, along with relevant evidence. These documents and contents should be checked by the Immigration Service and determined subjectively by the Examiner, so the valid reasons for persuading the Examiner should be explained in detail from the beginning.
The second way is to apply for a pardon called Rehabilitation. You can apply for pardons only after more than 5 years of being sentenced. Once amnesty is applied and approved, the previous criminal record is no longer a problem for entry into Canada and is not an obstacle to receiving permanent residency. However, it takes an average of 1 to 2 years to apply for amnesty and get approval, and there is no guarantee that the amnesty will be 100%, so you have to write down why this incident occurred and what kind of mindset you will have to take to prevent it from happening again.
If there is a record like this, entering Canada may not be easy at first, but there are various ways to solve it. However, as everyone knows, it is important to prevent this from happening in advance because it is not necessary to have these records to easily receive entry to Canada, employment, academic permission, and permanent residency.