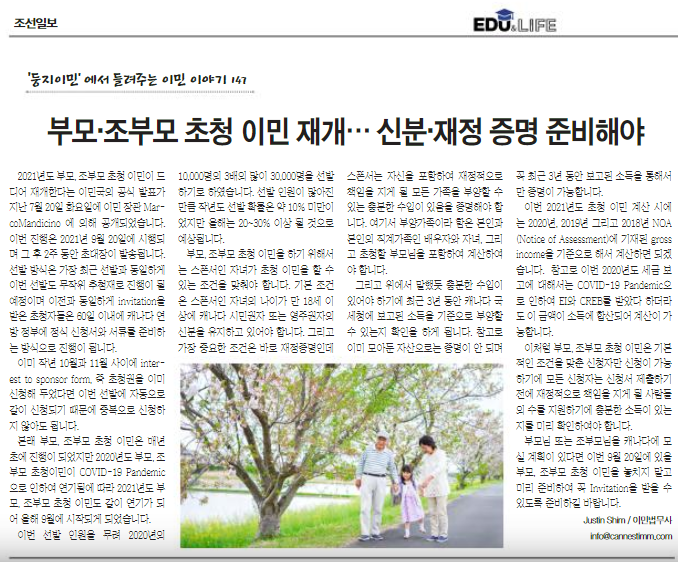 The Immigration Service's official announcement that the 2021 immigration of parents and grandparents will finally resume was made public by Immigration Minister Marco Mandicino on Tuesday, July 20. This process will take effect on September 20, 2021 and an invitation will be sent for the next two weeks. The selection process will be the same as the most recent selection, and invitees who receive the same invitation will prepare formal applications and documents from the Canadian federal government within 60 days.
If you have already applied for an interview to sponsor form between October and November last year, you will be automatically applied for this selection, so you don't have to apply in duplicate.
Originally, immigration to parents and grandparents took place early every year, but due to the postponement of 2020 immigration to parents and grandparents due to the COVID-19 Pandemic, 2021 immigration to parents and grandparents was postponed and started in September this year.
We decided to select 30,000 people, three times more than 10,000 in 2020. As the number of players has increased, the probability of selection was less than 10% last year, but it is expected to be more than 20 to 30% this year.
In order to immigrate to parents and grandparents, you must meet the conditions in which your sponsor's child can immigrate. The basic condition is that the sponsor's child must remain a Canadian citizen or permanent resident at least 18 years of age. And the most important condition is financial proof, which the sponsor must prove that he or she has enough income to support all the families that will be financially responsible, including himself. Here, dependents should be calculated including themselves, their immediate family spouses and children, and their parents to be invited.
And, as I said above, we need to make sure that we can support it based on income reported to the Canadian Revenue Service over the last three years because we need to have enough income. For your information, you cannot prove it with assets you have already collected, but you can only prove it through income reported in the last three years. This 2021 immigration calculation will be based on the gross incentive listed in the 2020, 2019 and 2018 Notice of Assessment (NOA). For your information, even if we received EI and CREB due to COVID-19 Pandemic, this amount can be added to income and calculated.
As such, immigration to parents and grandparents can only be applied to those who meet basic conditions, all applicants must check in advance whether they have enough income to support the number of people who will be financially responsible before submitting the application.
If you have a plan to bring your parents or grandparents to Canada, don't miss the immigration of your parents and grandparents on September 20th and prepare in advance so that you can receive the invitation.