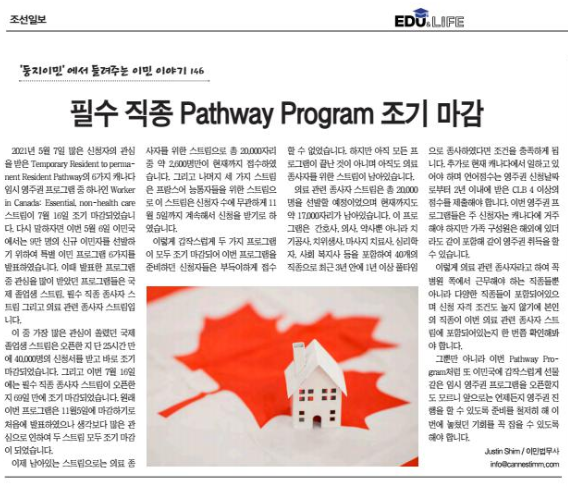 On May 7, 2021, one of the six temporary Canadian permanent residency programs of the Temporary Resident to Permanent Resident Pathway, Worker in Canada: Essential, non-health care streams, closed early on July 16, 2021. In other words, on May 6, the Immigration Service announced six special immigration programs to select 90,000 new immigrants. Among the programs announced at this time, the programs that received a lot of attention are international graduate stream, compulsory occupation stream, and medical-related employee stream.
The international graduate stream, which attracted the most attention, ended early after receiving 40,000 applications just 25 hours after its opening. And on July 16, the required job stream closed early 69 days after opening. Originally, the program was announced to close on November 5th, but due to more interest than I thought, both streams were closed early.
The remaining stream is for healthcare workers, with only about 2,600 out of a total of 20,000 registered to date. And the other three streams are for French speakers, which will continue to receive applications through November 5, regardless of the number of applicants.
As both programs were closed so suddenly, applicants who were preparing for this program were unavoidably unable to register. However, not all programs are yet over and there is still a stream for healthcare workers.
A total of 20,000 healthcare workers were scheduled to be selected and there are still about 17,000 seats left. The program meets the requirements if you have worked full-time for more than a year in the last three years, including nurses, doctors, pharmacists, as well as dental workers, dental hygienists, massage therapists, psychologists and social workers. In addition, you must currently work in Canada and submit a score of CLB 4 or higher within two years of the date of application for permanent residency. These permanent residency programs require the main applicant to live in Canada, but family members can acquire permanent residency together, even if they are overseas.
You should check to see if your job is included in the stream of healthcare-related workers, as well as a variety of jobs that require you to work at the hospital.
In addition, like the Pathway program, we may suddenly open a temporary permanent residency program like a gift to the immigration office, so we should prepare thoroughly to proceed with permanent residency anytime in the future so that we can seize the opportunity we missed this time.