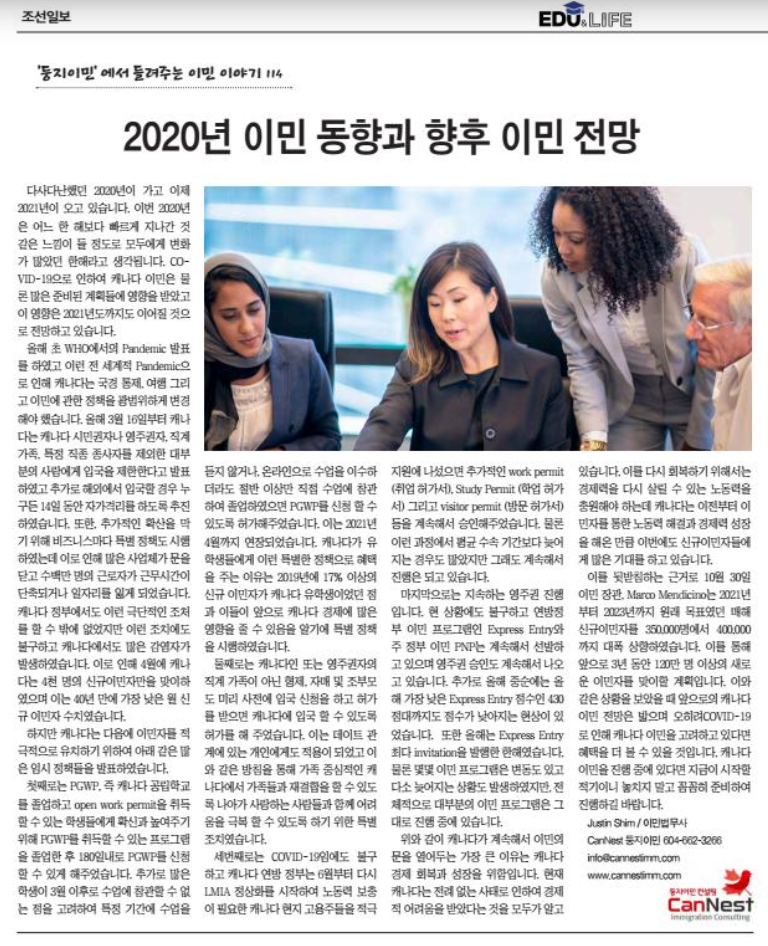 The eventful year of 2020 is gone and 2021 is coming. I think 2020 has been a year of change for everyone to feel like it has passed faster than any other year. COVID-19 has been influenced by immigration to Canada as well as many prepared plans, and it is expected to continue until 2021.

Earlier this year, the WHO made a Pandemic announcement and this worldwide Pandemic forced Canada to make extensive changes to its policy on border control, travel and immigration. From March 16 this year, Canada announced that it would restrict entry to most people except Canadian citizens, permanent residents, immediate family members and certain professions, and pushed for 14 days of self-isolation for anyone who enters from abroad. In addition, special policies were implemented for each business to prevent further proliferation, which resulted in many businesses shutting down and reducing working hours or losing jobs for millions of workers. The Canadian government had no choice but to take such extreme measures, but despite these measures, there have been many infections in Canada as well. This resulted in Canada receiving only 4,000 new immigrants in April, the lowest monthly immigration figure in 40 years.

However, Canada has announced many temporary policies as below to actively attract immigrants next time.
First, I was able to apply for PGWP within 180 days of graduating from PGWP, or Canadian public schools, and then applying for PGWP within 180 days of graduating from a program that would give confidence and enhancement to students who could earn an open work permit. In addition, considering that many students are not allowed to attend classes after March, if they do not attend classes for a certain period of time or if they have completed classes online, they are allowed to apply for the PGWP if they have attended and graduated in personally. It was extended until April 2021. The reason why Canada benefits from such a special policy is that more than 17% of new immigrants were Canadian students in 2019, and that they could have a great impact on the Canadian economy in the future.

Second, brothers, sisters, and grandparents who were not directly Canadian or permanent residents' families were allowed to enter Canada if they applied in advance and received permission. This applied to individuals in a dating relationship, and this was a special measure to help them get back together with their loved ones in a family-oriented Canada.

Thirdly, despite COVID-19, the Canadian federal government began normalizing LMIA again in June, continuing to approve additional work permitt (employment permit), Study Permit (visitor permit) and more if it actively supported local employers in Canada who needed to supplement. Of course, this process has often been delayed than the average check-in period, but it's still going on.

Lastly, we will proceed with permanent residency. Despite the current situation, the Federal Immigration Program Express Entry and the State Immigration PNP continue to be selected, and permanent residency approval continues. In addition, in the middle of this year, the lowest Express Entry score of the year was lowered to the 430 mark. Also, this year was the year when Express Entry was issued the most invitation. Of course, some immigration programs have fluctuated and experienced some delays, but most immigration programs are still ongoing.

As above, the biggest reason why Canada continues to open the door to immigration is for economic recovery and growth in Canada. Everyone knows that Canada is currently suffering from economic difficulties due to unprecedented events. In order to recover this, we need to increase the number of workers who can revive the economy, but Canada is expecting a lot from new immigrants again this time as it has been working to solve the problem and grow its economic power through immigrants.

To support this, on October 30, the Minister of Immigration, Marco Mendicino, raised the number of new immigrants from 2021 to 2023 from 350,000 to 400,000 each year. It plans to welcome more than 1.2 million new immigrants over the next three years. Given this situation, the prospect of future immigration to Canada is on the horizon, and if you are considering immigration to Canada due to COVID-19, you will see more benefits. If you are immigrating to Canada, it's time to start now, so please prepare thoroughly and proceed.