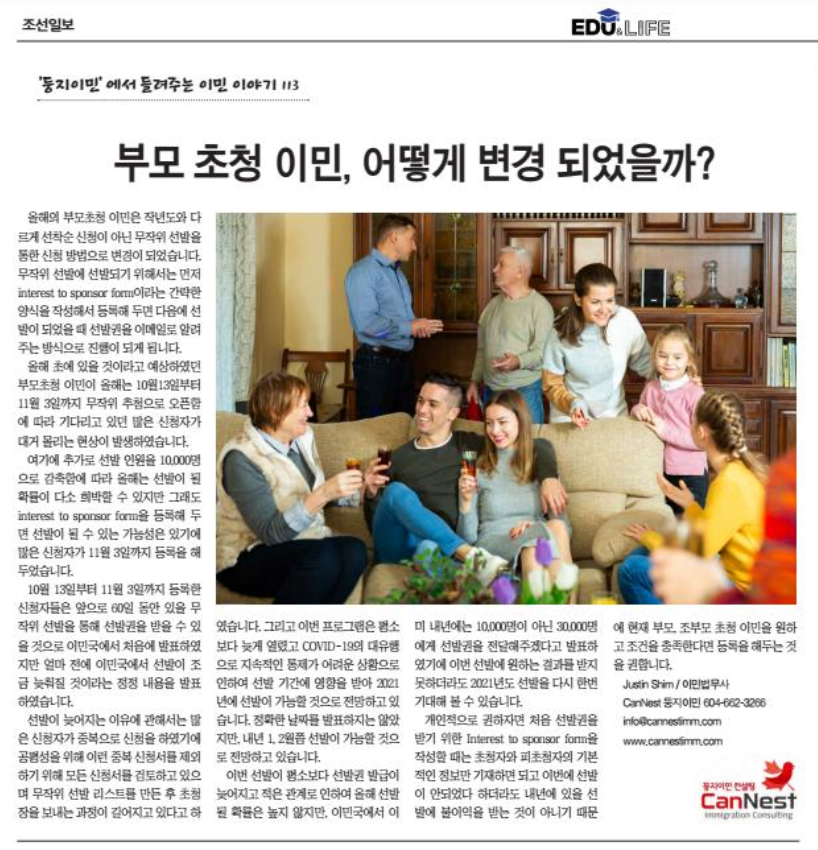 This year's parent-invited immigration was changed to a random selection method, not a first-come, first-served application, unlike last year. In order to be selected randomly, if you first fill out a brief form called the interst to sponsor form and register it, you will be notified by email of your selection right the next time you are selected.

As the parent-invited immigration, which was expected to take place earlier this year, opened in a random draw from October 13 to November 3, many waiting applicants flocked. With the additional reduction of the number of applicants to 10,000, the chances of being selected this year may be a little slim, but many applicants have registered until November 3 because registration of the intern to sponsor form is possible. Applicants registered from Oct. 13 to Nov. 3 initially announced at the immigration office that they would be able to receive the selection through random selection for the next 60 days, but not long ago, the immigration office announced a correction that selection would be delayed a little.

As for the reason for the delay in selection, many applicants have applied in duplicate, so they are reviewing all applications to exclude such duplicate applications for fairness, and the process of sending invitations after making a random selection list is getting longer. And this program was held later than usual and is expected to be selected in 2021 due to the influence of the selection period due to the situation where continuous control is difficult due to the pandemic of COVID-19. Although the exact date has not been announced, it is expected to be selected around January or February next year.

The chances of this selection being selected this year are not high due to the delay in issuance of the selection and fewer than usual, but the immigration office has already announced that it will deliver the selection to 30,000 people, not 10,000 next year, so even if you don't get the desired results, you can look forward to the selection in 2021.