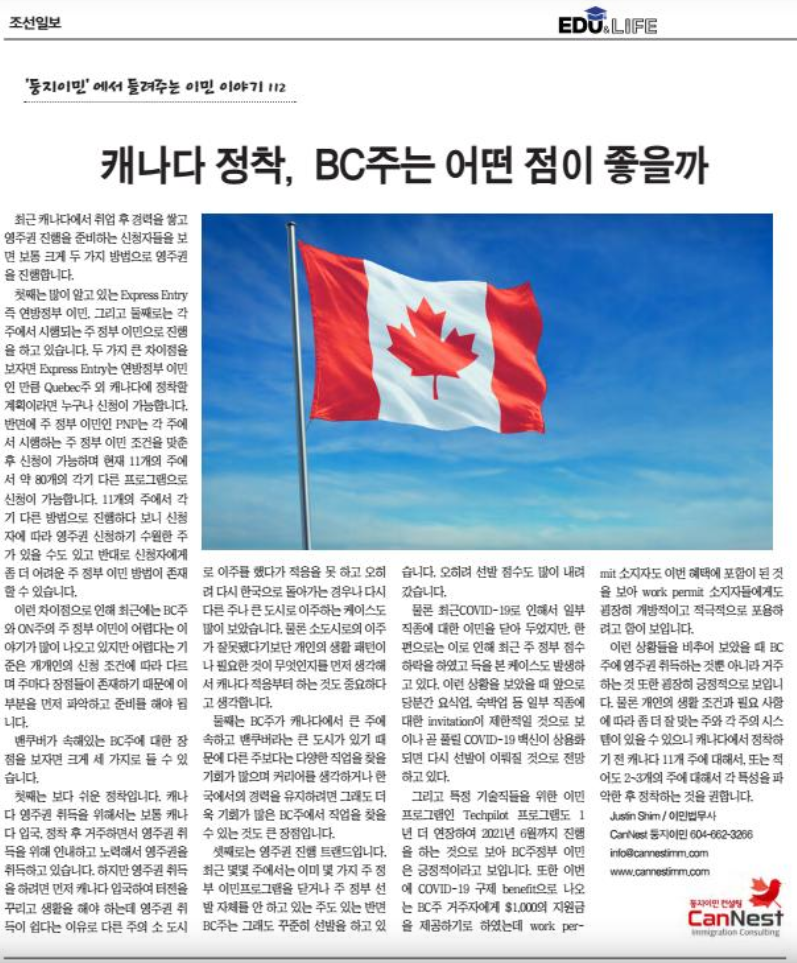 When you look at applicants who have recently developed their career after employment in Canada and are preparing to proceed with permanent residency, they usually do it in two main ways. First, we're proceeding with the much-known Express Entry, or federal immigration, and secondly, state immigration in each state. The two big differences are that Express Entry is a federal immigrant, so anyone planning to settle in Canada outside Quebec can apply. On the other hand, state immigrants, PNPs, can apply after matching state immigration conditions and currently apply to about 80 different programs in 11 states.

As 11 states proceed in different ways, depending on the applicant, there may be states that are easier to apply for permanent residency, and on the other hand, there may be more difficult ways of immigration to the state for the applicant. Due to these differences, many people say that it is difficult to immigrate to the state of BC and ON, but the criteria for difficulty vary depending on individual application conditions and there are advantages of each state, so we need to understand this part first and prepare for it.

There are three main advantages to the BC shares that Vancouver belongs to.

Second, since BC is a big state in Canada and there is a big city called Vancouver, it is also a great advantage to find a job in BC, which has more opportunities than other states, and if you want to think about your career or maintain your career in Korea.

Third, it is a permanent residency trend. In recent years, some states have already shut down some state immigration programs or have not selected the state itself, while BC has been consistently selecting. Rather, the starting score has gone down a lot. Of course, some jobs have been closed due to COVID-19, but this has led to a recent drop in state scores and a profitable case. Given this situation, there will be a limited number of jobs such as restaurants and lodging for the time being, but it is expected that selection will be made again when the COVID-19 vaccine, which will be released soon.

And since Techfilot, an immigration program for certain technical professions, is extended for another year until June 2021, BC state immigration seems to be positive. In addition, we have decided to provide $1,000 in assistance to BC residents in COVID-19 relief benefit, and since work permitators are included in this benefit, we are willing to be very open and active to work permit holders.

In light of these circumstances, it seems very positive not only to acquire permanent residency in BC, but also to live in BC. Of course, there may be a better fit state and state system depending on individual living conditions and needs, so it is recommended that each characteristic be identified for 11 Canadian states or at least two to three Canadian states before settling in Canada.