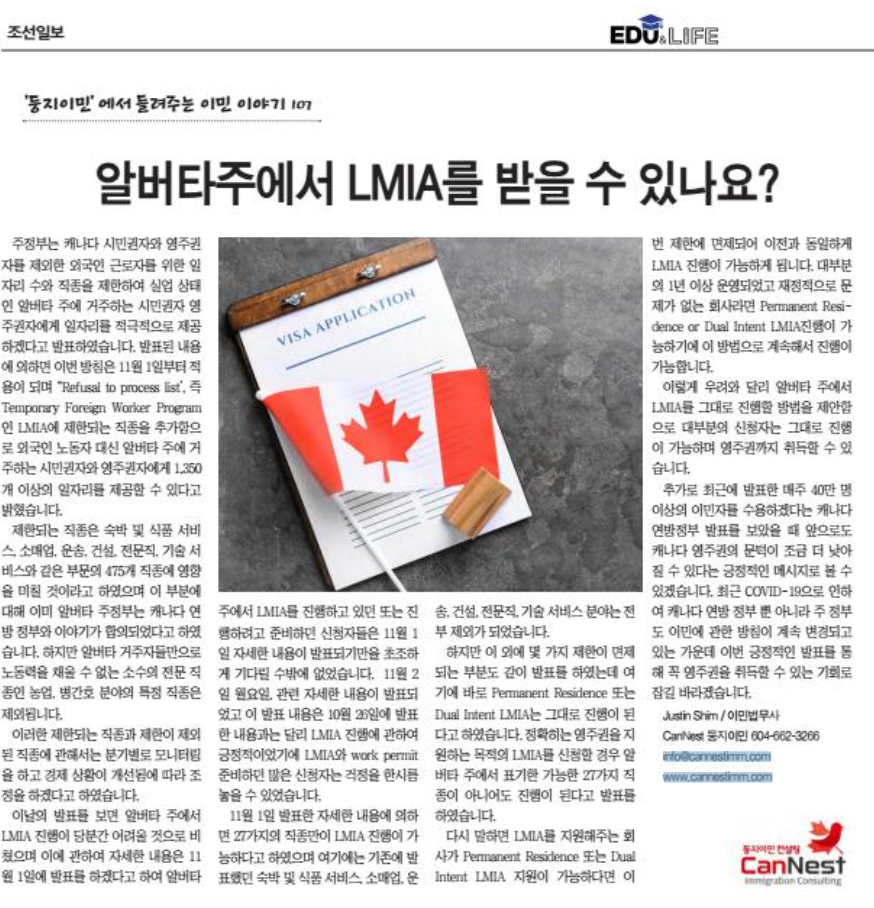 On October 26, Alberta announced that it would actively provide jobs to citizens living in the unemployed state of Alberta by limiting the number of jobs and occupations for foreign workers except Canadian citizens and permanent residents. According to the announcement, the policy will take effect on November 1 and will provide more than 1,350 jobs to citizens and permanent residents living in Alberta instead of foreign workers by adding jobs limited to the "Republic to process list," or the Temporary Foreign Worker Program.

Restricted jobs will affect 475 jobs in areas such as accommodation and food services, retail, transportation, construction, professional and technical services, and the Alberta state government has already agreed to talk to the Canadian federal government. However, certain professions in agriculture and nursing are excluded, which are few professional occupations that cannot be filled by Alberta residents alone. Regarding these restricted jobs and those excluded from the restrictions, the ministry said it would monitor them quarterly and adjust them as the economic situation improves.

According to today's announcement, LMIA was unlikely for the time being in Alberta, and applicants who were hosting or preparing to proceed with the LMIA in Alberta had no choice but to wait impatiently for the details to be announced on November 1. On Monday, November 2nd, the details were announced and this announcement was positive about the progress of LMIA, unlike the announcement on October 26th, so many applicants who were preparing for LMIA and work permit were able to relax their worries.

According to details released on November 1, only 27 jobs are available for LMIA, excluding previously announced accommodation and food services, retail, transportation, construction, professional and technical services. But we've also announced that there are a few other things that we're exempt from, and that's where Permanent Residence or Dual Intent LMIA goes. To be exact, it is announced that if you apply for LMIA for the purpose of supporting permanent residency, it will proceed even if it is not the 27 possible professions marked by Alberta state. In other words, if a company that supports LMIA is able to support Permanent Residence or Dual Intent LMIA, it will be exempted from this restriction and will be able to proceed with LMIA as before. For companies that have operated for more than a year and have no financial problems, we can continue with this approach because of the availability of Permanent Residence or Dual Intent LMIA.