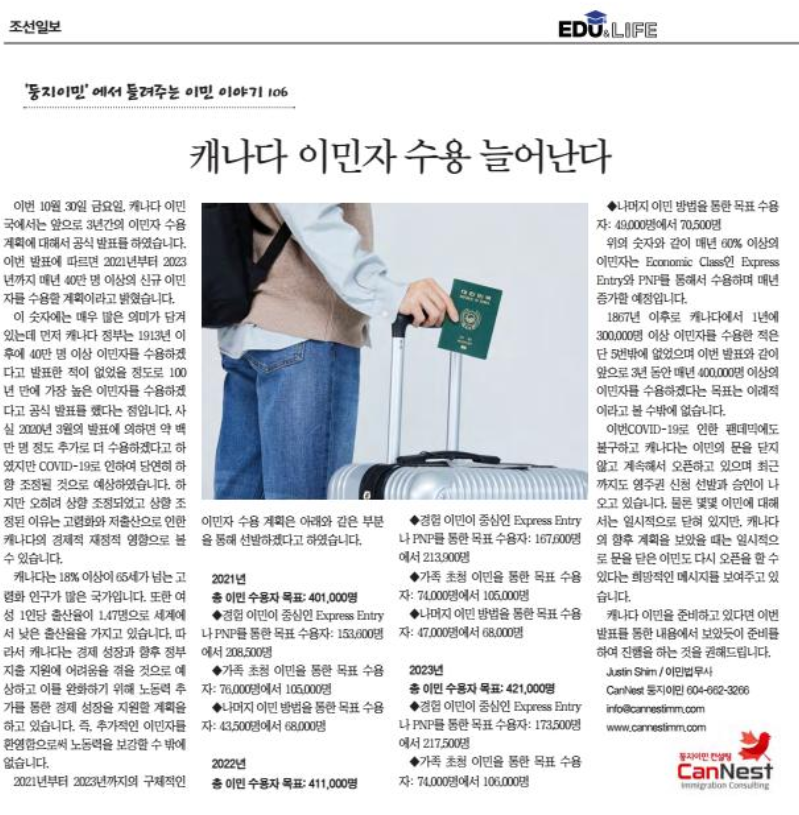 In fact, according to the announcement made in March 2020, the company said it would accommodate about a million more people, but expected that it would be lowered due to COVID-19. However, the reason for the upward revision is the economic and financial impact of Canada due to aging and low birth rates.

Canada has a large aging population of over 18% and over 65. It also has a low birth rate in the world with 1.47 births per woman. Therefore, Canada expects economic growth and future government spending to be difficult to support, and plans to support economic growth through the addition of additional labor force. In other words, by welcoming additional immigrants, we have no choice but to reinforce the workforce.

The specific immigration acceptance plan from 2021 to 2023 will be selected through the following sections.

As above, more than 60% of immigrants are accepted through the Economic Classes Express Entry and PNP and will increase every year.

Since 1867, Canada has only had more than 300,000 immigrants a year, and the goal of accommodating more than 400,000 immigrants a year over the next three years is unusual. Despite the fandemics caused by COVID-19, Canada continues to open its doors to immigration, and until recently, applications for permanent residency have been selected and approved. Although some immigration is temporarily closed, Canada's future plans show a hopeful message that temporarily closed immigration can be reopened. If you are preparing to immigrate to Canada, I recommend you to prepare and proceed as you saw in this presentation.