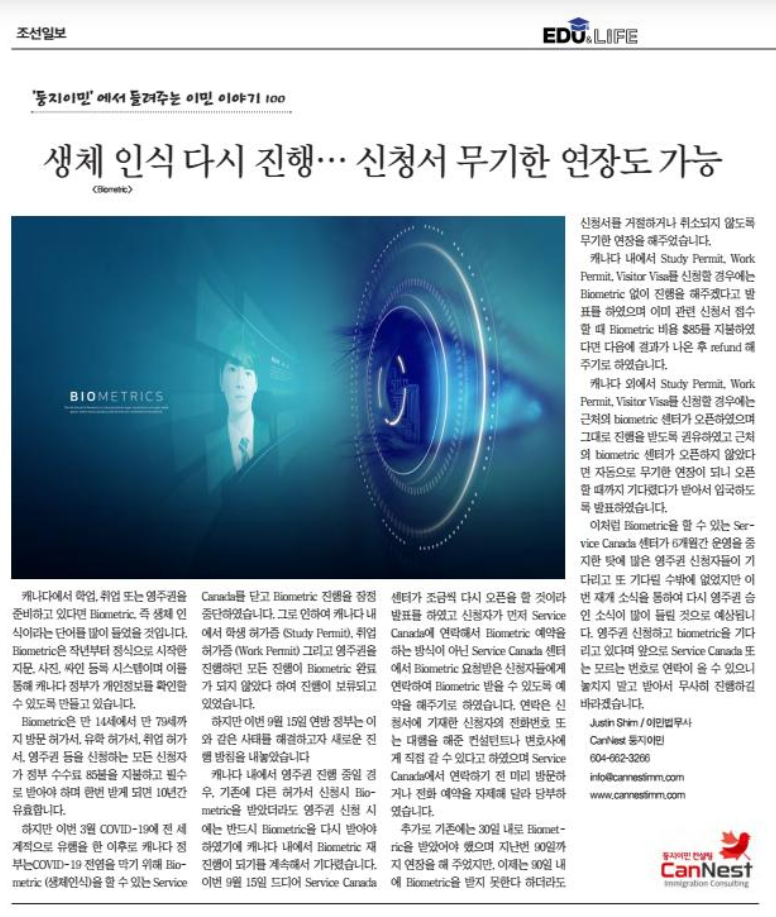 If you're preparing to study, get a job, or get a green card in Canada, you've heard a lot about Biometric, or biometrics. Biometric is a fingerprint, photo, and signature registration system that officially began last year, enabling the Canadian government to verify personal information. Biometric is valid for 10 years from 14 to 79 years of age, with all applicants applying for a visit permit, study permit, employment permit, permanent residency, etc. to pay a government fee of $85.

However, since the worldwide outbreak of COVID-19 in March, the Canadian government has temporarily suspended the progress of Biometric, closing the Biometric service Canada to prevent the spread of COVID-19. As a result, the progress of the study Permit, work Permit, and permanent residency in Canada was not completed, so the process was on hold. But on September 15th, the federal government came up with a new course of action to resolve the situation.

If permanent residency is in progress in Canada, we have been waiting for the re-promotion of Biometric in Canada because we had to receive Biometric again when applying for permanent residency, even if we had previously received Biometric when applying for other permits. On September 15th, we announced that Service Canada Center will be reopened little by little. Instead of first contacting Service Canada to make a Biometric reservation, we decided to contact applicants who received Biometric requests from Service Canada Center so that they can receive Biometric. The contact said that you can go directly to the applicant's phone number or the consultant or lawyer who acted on behalf of the applicant, and that you should refrain from visiting or making phone reservations before contacting Service Canada. In addition, we had to receive Biometric within 30 days and extended it to 90 days last time, but now we have extended it indefinitely so that even if we don't receive Biometric within 90 days, we don't reject the application or cancel it.

If you apply for Study Permit, Work Permit, or Visitor Visa in Canada, you have announced that you will proceed without Biometric. If you already paid $85 for Biometric fee when you received the relevant application, you will refund it after the next result is released.