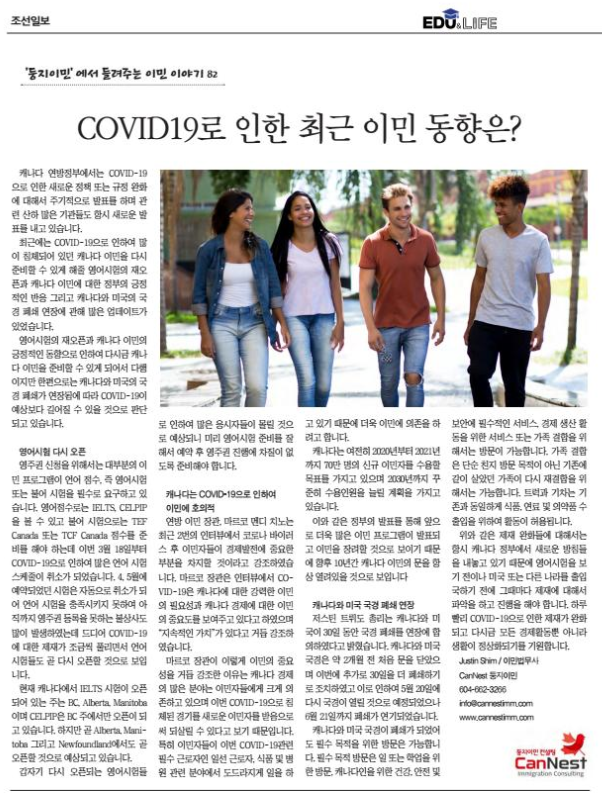 The Canadian federal government makes periodic announcements about new policies or deregulation caused by COVID-19, and many of its affiliated organizations are always making new announcements. Recently, there have been many updates on the re-opening of the English test, the government's positive response to Canadian immigration, and the extension of border closures between Canada and the United States, which will allow Canada to prepare for immigration again, which has been in a slump due to COVID-19.

It is fortunate that we are able to prepare for immigration to Canada again due to the re-opening of the English test and the positive trend of Canadian immigration, but on the other hand, we believe that COVID-19 could be longer than expected due to the extension of the border closure between Canada and the United States.

For permanent residency applications, most immigration programs require language scores, English tests or French tests. You can see IELTS and CELPIP for English score, and you have to prepare a TEF Canada or TCF Canada score for French test, but many language test schedules have been canceled since March 18th due to COVID-19. The tests scheduled for April and May were automatically canceled and failed to meet the language test, resulting in a number of mishaps in which permanent residency could not be registered, but as the sanctions on COVID-19 were finally lifted, the language tests are expected to reopen soon.
Currently, the states where IELTS tests are open in Canada are BC, Alberta and Manitoba, and CELPIP is open only in BC states. But it is also expected to open soon in Alberta, Manitoba and Newfoundland.
As many applicants are expected to be gathered due to the sudden re-opening of the English test, we should prepare well for the English test in advance so that there is no problem in the process of permanent residency after booking.


Canada is favorable to immigration due to COVID-19.

Federal Immigration Secretary Marco Mendi Chino recently stressed in two interviews that immigrants after the Corona virus will be an important part of economic development. In an interview, Marco said COVID-19 illustrates the need for strong immigration to Canada and the importance of immigration to the Canadian economy, and reiterated that there is "continuing value." Marco reiterated the importance of immigration because many sectors of the Canadian economy rely heavily on immigrants and believe that COVID-19 will help revive the sluggish economy by getting new immigrants. In particular, as immigrants stand out in the front-line workers, food and hospital sectors, which are essential workers for COVID-19, they want to rely more on immigration. Canada still aims to accommodate 700,000 new immigrants from 2020 to 2021, and plans to increase the number of new immigrants steadily by 2030.
The government's announcement is expected to open the door to Canadian immigration for the next 10 years, as more immigration programs will be announced and encouraged in the future.

Prime Minister Justin Trudeau said Canada and the United States have agreed to extend the 30-day border closure. The Canadian-American border was first closed about two months ago, and it was decided to close for another 30 days, so the border was scheduled to open again on May 20, but the closure was postponed until June 21.
Even if the Canadian-American border is closed, visits for essential purposes are possible. Essential Visits are available for work or study visits, health, safety and security-critical services for Canadians, services for economic production activities, or family combinations. Family bonding is not just for the purpose of visiting relatives, but for family members who have lived together to reunite. Trucks and trains are allowed to export and export food, fuel and medicines as usual.
As for the above sanctions relief, the Canadian government is always coming up with new policies, so it is necessary to identify the sanctions before taking the English test or before entering the United States or other countries. I hope that sanctions imposed by COVID-19 will be eased as soon as possible and that life will be normalized as well as all economic activities.